Fishing income in three states could increase by $60 million, with the potential for 900 new jobs. 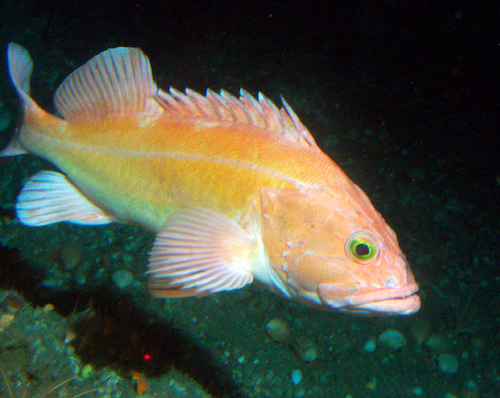 PORTLAND, Ore. (AP) — Federal officials said Tuesday they are increasing catch limits for several species of West Coast groundfish that were severely depleted more than a dozen years ago in a crisis that posed a threat to the commercial and sports fishing industries.

Limits for yelloweye rockfish will more than double, while substantial increases will be allowed for California scorpionfish, bocaccio and Pacific Ocean perch, the National Marine Fisheries Service said. Those species have recovered enough to allow for the greatest expansion of a West Coast fishery in years. The formal announcement of the revised catch limits will be published Wednesday and the changes go into effect on January 1, the first day of the new fishing season.

Fishing income in California, Oregon and Washington could increase $60 million because of the changes, with the potential for 900 new jobs and at least 200,000 more angler trips a year, according to a preliminary report. "It'll actually allow us to fish," said Tom Marking, a recreational fisherman from Eureka, California.

"Right now, there are a lot of places you just avoid because they're known as yelloweye hot spots. You just stay away from them. If they allow us to go to 30 fathoms or 40 fathoms or all depths, it'll allow the fleet to spread out." Between 1999 and 2002, nine West Coast groundfish stocks were declared overfished as surveys documented declining numbers.

Because more than 90 total groundfish species share the same habitat, anglers fishing for a permitted species risked also catching restricted fish and exceeding the overall limit — a mistake that could mean an end to the fishing season for that particular species. The limits devastated the fishing industry along the West Coast. Many businesses went under and tensions between the industry and federal regulators ran high for years.

"Back then, one boat could catch all the quota for one species in one day," said Jason Cope, a research fisheries biologist at the National Marine Fisheries Service. "There was a lot of avoidance, a lot of places you couldn't go and probably a lot of paranoia. It was a lot of kind of walking on eggshells."

Improved population numbers mean there's now a buffer for such mistakes and anglers can go to places they haven't fished in years without as much worry, he said. Key to these changes is the recovery of the yelloweye rockfish, one of several species of rock fish that were in trouble just 15 years ago.

The combined annual catch limit for the yelloweye will increase from 20 metric tons to 48 metric tons in 2019, although regulators could begin to make adjustments to fishing restrictions when the catch approaches 39 metric tons to allow room for error.

Anglers will be able to fish at greater depths and in locations that were previously off-limits. One immediate effect will see fewer fishing boats crowded near the shore where anglers were less likely to net the overfished species.

Several other species of groundfish have already recovered to levels that have allowed greater catch limits. Those species include petrale sole, widow rockfish and canary rockfish. There are more than 65 species of rockfish off the West Coast from Alaska to California. Some types can live up 150 to 200 years, Cope said, and they give live birth.

John Holloway, a member of the Pacific Fisheries Management Council, which recommended the changes, said the increased catch limit will be transformative for the industry. "This will basically affect all the fishing sectors to some degree or another," he said. "Every fishing sector ... runs up against yellow eye rockfish, including the trawl fleets and all that."