A group of countries sent a joint letter asking Chinese regulators to suspend a proposed requirement that each food shipment have an inspection certificate from a foreign government. 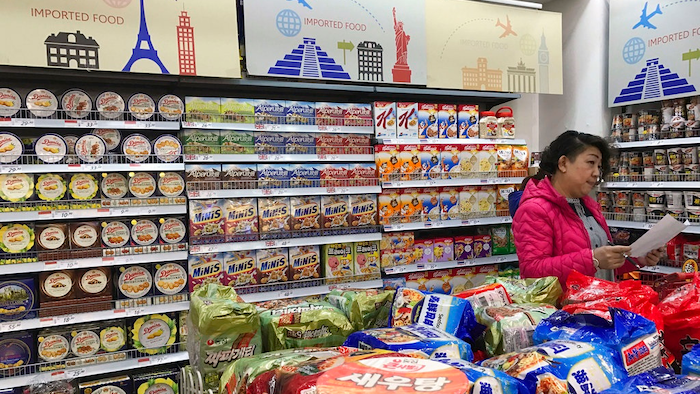 BEIJING (AP) — Food exporters including the United States and European Union are stepping up pressure on China to scale back plans for intensive inspections of imports that they say would hamper access to its fast-growing market.

The group, which also includes Japan and Australia, sent a joint letter to Chinese regulators asking them to suspend a proposed requirement, due to take effect Oct. 1, for each food shipment to have an inspection certificate from a foreign government. They say that would disrupt trade and ask Beijing to follow global practice by applying the requirement only to higher-risk foods.

The dispute, about which governments have said little in public, adds to complaints Beijing is reducing market access for goods ranging from medical technology to farm-related biotech in violation of its free-trade commitments.

The letter, dated June 12 and seen by The Associated Press, was sent by an unusually broad group including the 28-nation European Union, the United States, Japan, Australia, Argentina and Israel and four other countries. It is addressed to the director of the General Administration of Quality Supervision, Inspection and Quarantine, known as AQSIQ, and the Chinese commerce minister. A foreign official who asked not to be identified further due to the sensitivity of the issue confirmed the letter was sent to Chinese regulators.

The letter says the rules would affect billions of dollars' worth of meat, fruit, dairy and other products and thousands of suppliers who look to China as a growing export market. Foreign suppliers complain Beijing already uses safety rules in ways that hamper access for beef and other goods in violation of its market-opening commitments.

AQSIQ did not reply to a request for comment or questions sent by fax about how regulations might be changed in response to foreign appeals.

The depth of U.S. concern about the impact on American farmers and food processors is reflected in Washington's decision to take part in the group at a time when President Donald Trump has downplayed trade disputes with Beijing to gain Chinese support in dealing with North Korea.

The EU role highlights the broad scope of foreign anxiety. Action by the EU requires unanimous agreement by its members, which means nations including Greece and Hungary that want to attract Chinese investment consider the threat serious enough to risk a possible backlash. Eastern European countries with little manufacturing pay for Chinese goods by selling ham, apples and other food to China.

Chinese food imports in the first four months of this year rose 17 percent over a year earlier to $39.4 billion.

Foreign governments have been lobbying Beijing since last year to scale back the proposed regulations. European officials complained they appeared to be intended to shield Chinese suppliers from competition and allow Beijing to block imports from individual countries if it chose.

China submitted its proposed regulations to the World Trade Organization as an official notice to other governments, which have 60 days to comment on them. They were posted this week on a WTO website.

In a possible concession to foreign appeals, the regulations on the WTO website say inspection certificates would be required to say food items were made by a supplier supervised by government regulators and were fit for human consumption. That appeared to be a significant change from an earlier proposal to require inspectors to confirm that food complies with China's quality standards, a provision to which foreign governments objected.

The latest version still says each "batch of food" would require a certificate, a step foreign officials previously complained would waste resources that should be focused on high-risk products such as dairy.

The June 12 letter appeals to Chinese regulators to alter the proposed rules to allow imports from foreign suppliers that are approved by government inspectors without requiring a separate certificate for each shipment.

The rules would apply to items from meat and dried fruit to cocoa and spices, according to the document.

Foreign officials earlier expressed concern they might extend to such products as coffee, wine, pasta and chocolate, but it was unclear whether the list submitted to the WTO included such processed foods.

China contends the inspection requirement is supported by the Codex Alimentarius, the "Food Code" of the U.N. Food and Agriculture Organization and World Health Organization. The Codex sets quality standards but other nations say it recommends certificates only for risky products.

The EU and other governments arranged for the president of the Codex council, Awilo Ochieng Pernet, a Swiss lawyer, to attend an April 6 seminar with Chinese officials in Beijing to explain its standards.

The proposed rules follow an avalanche of scandals over Chinese suppliers caught selling tainted milk and other shoddy or counterfeit food products.

Beijing already is at odds with the U.S. and Europe over low-priced exports of steel and aluminum they say are hurting foreign competitors.

In the Trump administration's first trade complaint, a group for American aluminum producers asked March 9 for higher import duties on Chinese-made aluminum foil to counter what it said were improper subsidies.