'American and Canadian whisky have nothing on this.' 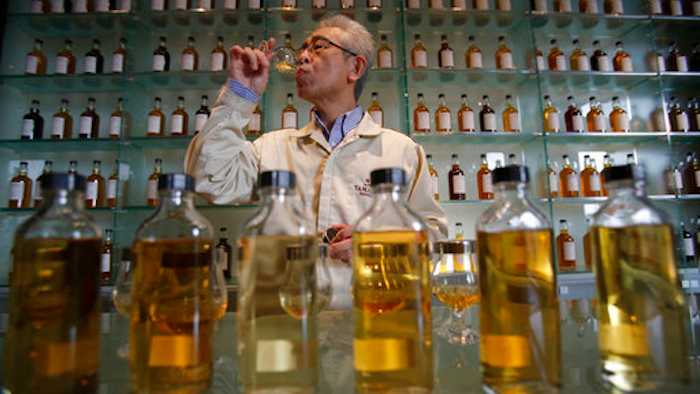 The Suntory distillery in Yamazaki, near the ancient capital of Kyoto, is where the first drop of made-in-Japan malt whisky was distilled in 1924.

These days, Japanese whisky is winning accolades from around the world, often beating the products from Scotland its makers set out to emulate.

In 2003, the Yamazaki 12 Years single malt whisky became the first Japanese whisky to win the gold medal at the International Spirits Challenge, the most authoritative liquor competition in the world. Last year, Hibiki, another Suntory label, won the World's Best Blended Whisky prize at the World Whiskies Awards, for the fourth time. A bottle of Yamazaki Sherry Cask, aged 25 years, fetches thousands of dollars each.

"They have a lot more earthiness to them. They are much more a product of their environment," Wes Barbee, a 23-year-old consultant from Houston, gushed as he joined dozens of Japanese and foreign tourists visiting the Yamazaki distillery and lining up for a taste.

"American and Canadian whisky has nothing on this. It's mass production. This is very intimate. The flavors are carefully chosen," he said.

Japan Inc. abounds with stories of manufacturers like automaker Toyota Motor Corp. and musical instrument manufacturer Yamaha Corp. that at first imitated Western pioneers in their industries but ended up matching if not outdoing them.

Suntory founder Shinjiro Torii was determined to introduce Scotch to Japan. Overcoming early failures, he eventually adapted his methods to distill a whisky palatable to Japanese.

Experts believe that aside from Japan's clean and tasty ground water, its four distinct seasons help to deepen whisky flavors during years of aging.

Scotland's many distilleries make blending whisky flavors easy. Suntory had to develop its own array of flavors using various temperatures and combinations of yeasts for fermentation, as well as more complex methods of distilling whisky.

After fermentation, the beige liquid gets heated and distilled in "pot stills," huge metallic containers of varying shapes that can quicken or delay the distilling process, yielding nuances of flavors.

The result is a colorless liquid that smells almost like antiseptic that is stored in barrels, or casks, in a cavernous warehouse designed for aging whiskies. No nails are used in the casks, whose strips of old wood are bound by tightened metal rings. Aging gives whisky its color and personality — what whisky lovers say distinguishes it from wine or beer.

The casks, used over and over again, include old wine and bourbon barrels. Some are from Europe and the U.S. and others are made of Japanese oak. Suntory's three distilleries in Japan house a million casks.

Flavors of each cask are mixed — just right, like a "jigsaw puzzle," he says — to create, and recreate, various kinds of whisky and develop new ones.

A serious-looking, slight man with graying hair, Fukuyo says he avoids garlic or greasy fish, especially for breakfast, to keep his taste buds pure for his job.

"What's important for whisky is that its deliciousness must deepen with aging, sitting in the casks for a long time," said Fukuyo, 55, demonstrating how he examines the whisky in a glass, swirling the crystalline amber spirit against the light.

He gently rolls a sip on his tongue, then spits it out: Fukuyo does 100 such tastings a day, sometimes more than 200. He switches positions of the glasses on the table to remember what he just tasted. There is no time for note-taking.

"It's a clean and beautiful taste. It's hard to explain in words," he said of Japanese whisky.

Japanese whisky aged in a white oak cask has a hint of citrus or green-apple. One aged in a sherry cask is fragrant, rich and sweet, evocative of dried fruit. Whisky aged in Japanese oak and smoky whisky have pungent, herbal flavors.

The growing popularity of Japan's cuisine has helped win a following for its whisky, which was designed to be consumed with food, experts say.

Nikka Whisky, a unit of Asahi Breweries, froze its overseas expansion in 2014, finding it impossible to keep up with demand, says Emiko Kaji, who manages Nikka's international business.

Nikka Whisky From the Barrel, packaged in a sleek bottle, is doing especially well in Europe, she says.

Sukhinder Singh, owner of London-based retailer The Whisky Exchange, says he has had to ration his supplies of Japanese whisky to hotels and restaurants. He never seems to have enough.

At first, Japanese victories in blindfold whisky contests baffled connoisseurs. By now the Japanese blends have won over even the skeptics, he said.

When whisky expert Jim Murray voted the Yamazaki Sherry Cask the Best Whisky in the World for his 2015 Whisky Bible, its price shot up overnight. Prices of other Japanese whiskies have also been rising.

"Everyone went: We want to buy Japanese," Singh said in a phone interview. "The problem we have at the moment is not selling it. It's getting it.

"We can sell every bottle we can get," he said.

Zoetrope, a tiny bar in a dingy Tokyo backstreet building, is famed among lovers of Japanese whisky.

"Japanese whisky has an unpredictability that makes it fun, and the highly skillful Japanese blenders have created a subtle taste with an impeccable balance," said Atsushi Horigami, Zoetrope's owner and bartender, standing before counters and shelves crammed with colorful bottles.

Thousands of miles (kilometers) away at Festa, a bar in San Francisco, banker Crystal Roseberry was trying Suntory's Yamazaki 12, at $40 a drink, for the first time.

"Soft, silky, not jarring, elegant, friendly. And it still has a structure of a good whisky, which I think is very important," she said in an interview over an online call. "This whisky is intriguing,"

Bar owner Masae Matsumoto was glad to have stocked up on Yamazaki.

"It's gotten impossible to get over the last six months," she said. "Japanese whisky tastes so good."