The DeCosters were aware of unsanitary conditions at their Iowa egg farms but failed to improve them before an outbreak sickened up to 56,000 people. 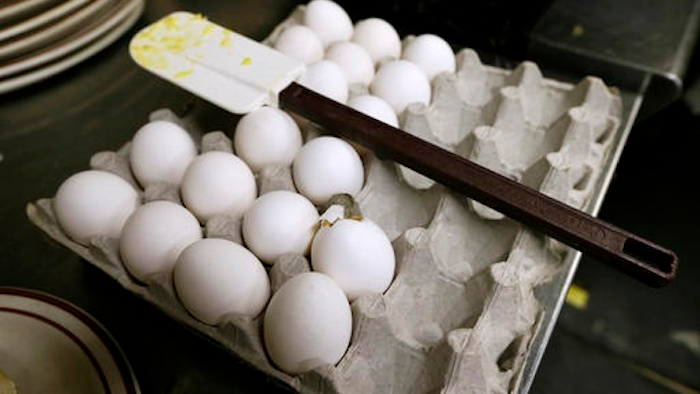 The DeCosters were aware of unsanitary conditions at their sprawling Iowa egg farms but failed to improve them before the outbreak, which sickened up to 56,000 people and left some with permanent injuries, Judge Diana Murphy wrote.

"We conclude that the record here shows that the DeCosters are liable for negligently failing to prevent the salmonella outbreak," Murphy wrote, joined by Judge Raymond Gruender.

The case, a rare prosecution against those responsible for an outbreak of foodborne illness, was closely watched by advocates for consumer safety and food and drug manufacturers.

At issue was whether corporate executives could face imprisonment for violating the federal Food, Drug, and Cosmetic Act, which allows "responsible corporate agents" to be held criminally liable even if they were not aware of the wrongdoing.

The DeCosters, who owned and operated Quality Egg LLC, had pleaded guilty to violating the law by introducing adulterated eggs into interstate commerce. They said they did not know the eggs were contaminated but acknowledged they were in a position to stop the problems had they known.

U.S. District Judge Mark Bennett ordered the jail time in April 2015, saying they knew or should have known about the risks posed by the presence of salmonella in and around millions of egg-laying hens. But he allowed the DeCosters to stay free while they appealed the sentences, which they argued were unconstitutional and unreasonably harsh.

Business groups, including the U.S. Chamber of Commerce and the National Association of Manufacturers, filed friend-of-the-court briefs backing the DeCosters' appeal. They argued that it would be unfair to send corporate executives to prison for violations that they were unaware of or that were committed by subordinates.

Murphy rejected those arguments, saying Congress did not require executives to have known about the violations to be subject to the food safety law's criminal penalties. She said the jail terms were relatively short, within federal guidelines and "not grossly disproportionate to the gravity of their misdemeanor offenses."

Gruender added in a concurring opinion that the DeCosters were not being punished for the acts of others, saying their own failure to take steps to prevent the outbreak was to blame.

Dissenting Judge C. Arlen Beam said prosecutors failed to show that the DeCosters had criminal intent, and therefore "there is no precedent" for sending them to jail. He said they were not aware the products were tainted with salmonella and that they immediately recalled hundreds of millions of eggs once the outbreak was confirmed "at great expense."

"This is hardly the stuff of 'guilty minds'," he wrote.

Quality Egg paid a $6.8 million fine after pleading guilty to felony charges of shipping eggs with false processing and expiration dates and bribing a U.S. Department of Agriculture inspector to approve sales of poor-quality eggs.