After more than a decade of service to OTA and the organic community, current CEO Laura Batcha plans to step down in spring 2022. 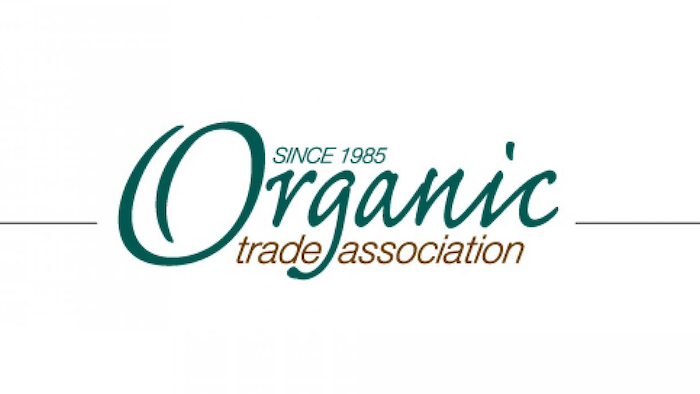 WASHINGTON — The Organic Trade Association (OTA) announced Oct. 18 the launch of a nationwide search for a new CEO and Executive Director. After more than a decade of service to OTA and the organic community, current CEO Laura Batcha plans to step down in spring 2022.

“If there’s one thing I’m feeling right now, it’s confident,” says Batcha. “Confident in my team at OTA, confident in the great folks at Korn Ferry who we’ve brought on to help with our search, and confident that the next person we select to lead this organization is going to bring a new outlook, fresh ideas, and a dedication to moving organic forward.” 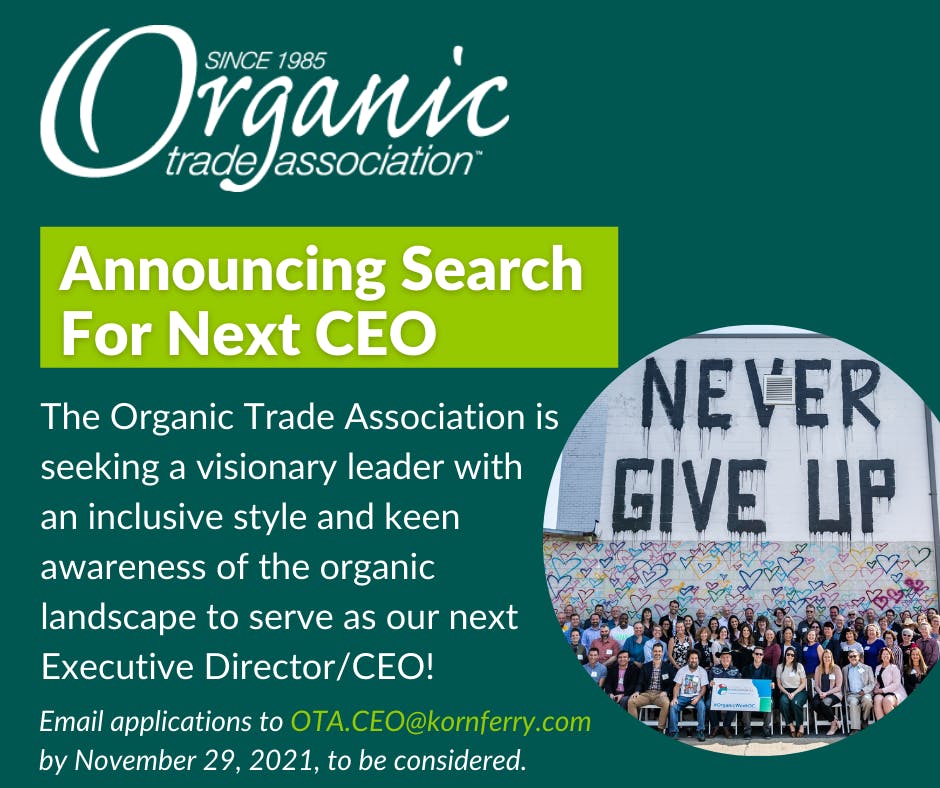 The trade association has hired global organizational consulting firm Korn Ferry to lead its search for this key role. Korn Ferry has extensive experience working with similar associations and a track record of success in finding and placing top-tier Executive Directors and CEOs. OTA’s search committee is composed of members of the association’s Board of Directors and led by Board Member Paul Schiefer of Amy’s Kitchen.

“OTA has grown tremendously over this past decade thanks to Laura’s leadership,” says Schiefer. “What we’re looking for is someone who can match that level of passion for organic, a visionary leader who can build on Laura’s legacy of success. OTA is steering the organic sector into the future; our next CEO will have the unique honor of guiding that journey.”

The CEO will provide leadership, coordination, and oversight of the organization and serves as the public face of OTA. Together with the Board of Directors, this executive will be responsible for defining the association’s mission and establishing shared objectives for OTA’s member companies. OTA is seeking a leader with a visionary and inclusive style who is skilled in relationship management and has a keen awareness of the organic landscape.

Korn Ferry has begun its process of recruitment. Interested individuals are invited to learn more about the opportunity and apply directly by submitting a resume and cover letter to OTA.CEO@kornferry.com. The cut-off date for applications is November 29.

A Legacy of Success

Throughout her life, Batcha has been deeply connected to the land and organic growing. She’s worked coast to coast on organic farms, started her own organic botanicals business (Green Mountain Herbs, which was sold to Tom’s of Maine in 1999), worked for several years at a multinational organization, and for the last thirteen years has led the Organic Trade Association (OTA). Batcha first joined OTA in 2008 as Director of Marketing and Public Relations, and was named CEO and Executive Director in January of 2014.

“The growth of our association and across the organic community during Laura’s tenure has been nothing short of spectacular,” says Schiefer. “Since Laura took the helm in 2014, OTA has been able to attract new partners at every scale and at every position along the value chain.”

During her tenure, Batcha substantially expanded the size and scope of OTA by building a team of expert staff, establishing the association’s DC office and government relations arm, and expanding opportunities for member engagement.

“One of the most significant improvements Laura has made at OTA,” says Kim Dietz, president of OTA's Board of Directors, “is how she’s helped expand the ways our members can plug in to the work. In addition to our Farmers Advisory Council and Sector Councils, OTA has also developed Task Forces that allow members to take a hands-on approach to important and timely policy issues like climate change and animal welfare.”

Having steered the trade association through three farm bills and multiple presidential administrations, Batcha has also played a key role in positioning OTA as the voice of organic on the Hill. Thanks to OTA’s efforts, organic has gone from a niche industry to one with a prime seat at the policymaking table. This strengthened position has resulted in millions more in federal dollars to key organic programs, including: Organic Agriculture Research and Extension; National Organic Program; National Organic Certification Cost Share Program; Environmental Quality Incentives Program – Organic Initiative.

Batcha has also been instrumental in helping the industry move forward by prioritizing issues like climate resilience, equity and systemic racism in the food and farm system, and animal welfare. As the leader of the trade association’s litigation strategy, Batcha spearheaded OTA’s 2020 lawsuit against USDA for its withdrawal of the final Organic Livestock and Poultry Production regulation. Her bold approach restarted long-dormant conversations between the organic community and USDA around animal welfare, and has positioned OTA to lead change on this critical issue going forward.

“Our work at the Organic Trade Association is always evolving, and I’m proud that we have the team in place – as well as support from our membership – to tackle the difficult issues that must be addressed in order our industry to grow and move forward,” says Batcha.

With strong support from Batcha, the OTA staff and board, and Korn Ferry, OTA is optimistic about the future of the Association.

The Organic Trade Association (OTA) is the membership-based business association for organic agriculture and products in North America. OTA is the leading voice for the organic trade in the United States, representing over 9,500 organic businesses across 50 states. Its members include growers, shippers, processors, certifiers, farmers' associations, distributors, importers, exporters, consultants, retailers and others. OTA's Board of Directors is democratically elected by its members. OTA's mission is to promote and protect ORGANIC with a unifying voice that serves and engages its diverse members from farm to marketplace.