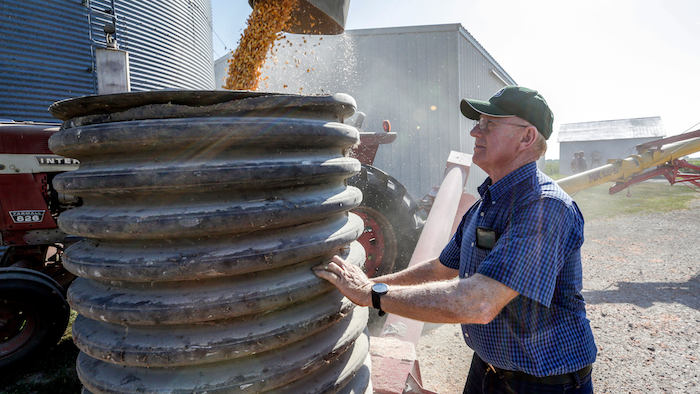 In this July 12, 2018 file photo, farmer Don Bloss checks on the operation of an auger transferring corn on his farm in Pawnee City, NE.
AP Photo/Nati Harnik, File

BEIJING (AP) — China's imports of soybeans surged in November following the announcement of an interim trade deal with the United States.

Imports rose 53.7% over a year earlier to 5.4 million tons, according to customs data.

Imports of U.S. soybeans more than doubled from the previous month to 2.6 million tons, according to AWeb.com, a news website that serves the Chinese farming industry.

China cut off purchases of American soybeans, the country's biggest import from the United States, after President Donald Trump raised import duties on Chinese goods in a dispute over Beijing's technology ambitions and trade surplus.

The two governments announced an interim “Phase 1” agreement in October but have yet to release details. U.S. officials say it might be signed as early as January.

U.S. officials said as part of that deal, Beijing will buy more American farm exports. Chinese officials have yet to confirm the possible scale of purchases.

Chinese government spokespeople said in September importers were placing orders for American soybeans but no details of purchases have been announced.

Chinese buyers use soybeans as animal feed and to crush for cooking oil.

Beijing bought more Brazilian soybeans, but no other supplier could fully replace the large scale of American supplies. That added to the strain on Chinese pig farmers who are struggling with an outbreak of African swine fever that has devastated herds.