Officials have been scrambling to halt the spread of the disease, disinfecting farms, trucks and roads, banning livestock movement and destroying over 93,000 pigs. 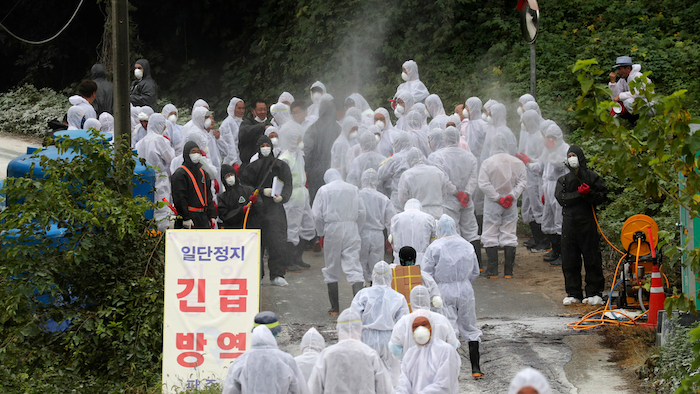 SEOUL, South Korea (AP) — South Korea on Wednesday confirmed two additional cases of African swine fever near its border with North Korea despite heightened efforts to contain the epidemic that has wiped out pig populations across Asia.

The Ministry of Agriculture, Food and Rural Affairs said lab tests confirmed the country's 10th and 11th cases of the disease at two farms in Paju, a border town where the first infection was confirmed on September 17.

Officials have been scrambling to halt the spread of the disease, disinfecting farms, trucks and roads, banning livestock movement and destroying some 93,500 pigs. They plan to slaughter at least 17,000 more pigs, including the animals at farms within a two-mile radius of the two Paju farms were infections were newly confirmed.

The illness is harmless to humans but highly fatal for pigs. There is no effective vaccine or treatment. Officials have yet to determine where the disease came from, but a likely source is North Korea, which reported an outbreak near its border with China in May. North Korea in recent months has suspended virtually all cooperation with the South amid a standstill in nuclear negotiations with the United States, which complicated efforts to prevent the disease from reaching the inter-Korean border area.

In a closed-door parliamentary briefing last week, South Korean spy chief Suh Hoon used charts to explain that the disease has spread to nearly all parts of North Korea, according to lawmakers who attended the session.

The U.S.-led United Nations Command said Wednesday that it has temporarily suspended visits and tours to the inter-Korean border village of Panmunjom to support South Korean efforts to contain the outbreak.