Pork prices in China surged 46.7 percent in August from a year earlier. 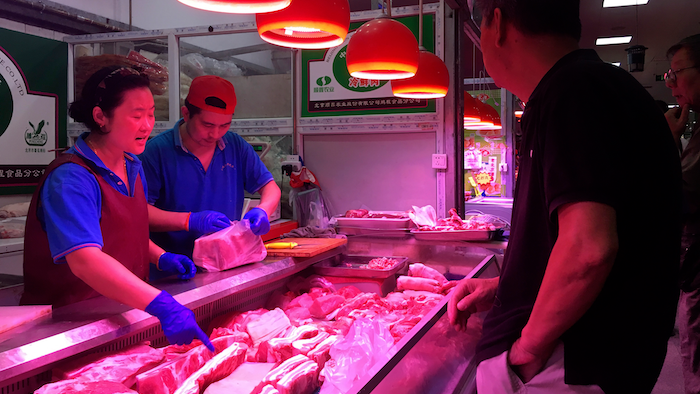 BEIJING (AP) — Chinese families are having to rethink menu options as pork prices soar despite government efforts to rebuild herds decimated by African swine fever and large-scale closures of pig farms for environmental reasons.  Liu Min, a 61-year-old retired cleaning lady, went ahead and bought a small chunk of pork that cost her $3 during a recent visit to a local fresh market. That's nearly twice what it usually costs.

After all, you can't make "zhajiang" style noodles without pork to go into its heavy bean-based sauce, Liu said. But pork is a big part of her diet, as it is for most Chinese, and the higher prices are pinching. "This is having a huge effect on me, a huge one," she said.

Pork prices surged 46.7 percent in August from a year earlier, adding 1.08 percentage points to a 2.8 percent rise in the consumer price index. That's hitting Chinese families hard: pork accounts for more than 60 percent of their meat consumption. "People complain pork is too expensive and buy less, so business is not going well," said Sun Tiantao, who sells pork in a market in Beijing.

China raises about half of the world's pigs, and the outbreaks of African swine fever that began over a year ago have ravaged its herds. The disease does not infect humans. To boost pork production, the government announced this week that it will take steps to help revive hog production, prevent and control the disease and upgrade farms to further ensure pork supplies and stable prices.

That will take some doing: in August hog stocks dropped nearly 40 percent from a year earlier and nearly 10 percent from July, according to the Ministry of Agriculture and Rural Affairs.

The trend is unlikely to reverse anytime soon, and piglet prices had more than doubled from a year earlier to $7.50 per kilogram as of last week, the ministry said. That means the price of pork will be rising for at least another six months. "It has to go up, because increasing supply is so difficult and the farmers are leaving, and they are not coming back," said Wang Dan, an analyst for the Economist Intelligence Unit.

The pork crisis has at least one advantage, Wang quipped, allowing China more "flexibility" in its trade talks with the U.S., since smaller herds mean less need to import soybeans for feed.

Human appetites are another question. "Better to eat less pork," said a story last week in the state-owned newspaper Life Times. It suggested a change in food habits may be in order.

Experts in China are debating the idea of swapping chicken, beef or even a man-made substitute for pork. In the meantime, Liu Min sometimes buys eggs instead. "Eggs are more expensive than earlier, but still cheaper than pork," she said.