The trio stole hundreds of millions in dollars from food import contracts at a time of widespread hunger. 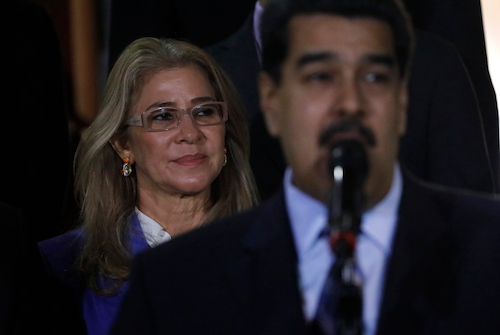 BOGOTA, Colombia (AP) — The U.S. on Thursday imposed sanctions on three stepsons of Venezuelan President Nicolás Maduro, accusing them of forming part of a sophisticated scheme that stole hundreds of millions in dollars from food import contracts at a time of widespread hunger in the crisis-wracked South American nation.

The network allegedly was run by Alex Saab, an obscure Colombian businessman who came onto the radar of U.S. authorities a few years ago after amassing a large number of contracts with Maduro's socialist government. The U.S. Treasury Department alleges that Saab utilized a network of shell companies spanning the globe — the UAE, Turkey, Hong Kong, Panama, Colombia and Mexico — to hide huge profits from no-bid, overvalued contracts obtained through bribes and kickbacks.

"Saab engaged with Maduro insiders to run a wide-scale corruption network they callously used to exploit Venezuela's starving population," said Treasury Secretary Steven Mnuchin. "They use food as a form of social control, to reward political supporters and punish opponents, all the while pocketing hundreds of millions of dollars through a number of fraudulent schemes."

Some of Saab's contracts were allegedly obtained by paying bribes to Yoswal, Yosser and Walter Flores, the children of first lady Cilia Flores from a previous relationship. The three men, commonly known as Los Chamos — Venezuelan slang for "the kids" — are also under investigation by prosecutors in Miami for allegedly forming part of an scheme to siphon $1.2 billion from Venezuela's state-owned oil company, two people familiar with the U.S. investigation told The Associated Press.

As the Trump administration seeks to regain momentum in its faltering campaign to oust Maduro and install opposition leader Juan Guaidó, it is increasingly going after family members of top officials backing the embattled leader and suspected of corruption. Last month, it froze the assets of Nicolas Maduro Jr., a member of the rubber-stamping constitutional assembly.

In total, 10 individuals were blocked from doing business in the U.S. by Thursday's actions, including Saab, his fellow Colombian partner Alvaro Pulido and several of their family members, as well as Maduro's stepsons. To date, the U.S. has sanctioned more than 100 top government officials and other insiders accused of corruption, human rights violations and drug trafficking, including Maduro and his wife, whom he calls Venezuela's "first combatant."

In going after what senior U.S. officials have dubbed "hunger profiteers," the Trump administration has also found a rich narrative to press its case that the social crisis that has forced 10 percent of the population to migrate is being fueled by unchecked corruption at the highest levels.

An investigation published by The Associated Press in 2016 revealed how senior Venezuelan officials and members of the military were enriching themselves by diverting money from food contracts. Since then, as hunger has spread, Maduro has moved to assert even greater control over food distribution, handing out monthly boxes of staples.

The so-called CLAP boxes, a Spanish acronym for Local Committees for Supply and Production, have become a tenuous lifeline for millions of citizens suffering from shortages and hyperinflation that reached 130,000 percent last year.

But critics accuse Maduro of essentially weaponized food, distributing the boxes primarily to government workers and supporters. The allegations have fueled calls from several Latin American governments, Canada and France for Maduro to be tried at the International Criminal Court for crimes against humanity.

U.S. officials believe Saab's rise began a decade ago after he signed an agreement to build social housing for the Venezuelan government. In 2011, he appeared on Venezuelan state television alongside Maduro, the late President Hugo Chavez and then-Colombian President Juan Manuel Santos.

From there, he and Pulido entered the food business through a Hong Kong-based company, Group Grand Ltd, which quickly amassed hundreds of millions of dollars' worth of contracts to import food despite having no known track record in the food business and a rudimentary webpage. The company was among the 13 entities sanctioned Thursday, including a Delaware-registered company controlled by Pulido's son and, for the first time in connection to Venezuela, firms in the UAE and Turkey.

Saab, from the Caribbean city of Barranquilla, was charged this year with money laundering in Colombia. U.S. officials believe he is hiding in Caracas, having ditched the globe-trotting lifestyle that saw him make frequent trips on a private jet to an apartment in Paris and his family's ancestral homeland of Lebanon.

Richard Diaz, a lawyer for Saab in Miami, didn't immediately reply to a request for comment. But in the past he rejected the allegations against his client, saying he was the target of a smear campaign by government opponents based on false testimony. No contact information was available for Maduro's stepsons so they could not be reached for comment.

As Saab and Pulido's influence grew, they drew the attention of the Trump administration, which has made a priority of going after top Venezuelan officials where it hurts them most: their wallets. Led by Marshall Billingslea, the assistant Treasury secretary for terrorist financing, U.S officials have spent two years pursuing the Saab-Pulido network, traveling throughout the region to gather sensitive banking and trade information from allied nations.

"This goes beyond just corruption," Billingslea said in an interview last year with The Associated Press. "This is literally looting the one social safety net program left in Venezuela." Billingslea, who Trump nominated this year to become the State Department's top human rights official, did not respond to a request for comment on Thursday.

But even as the pressure on the two men was building, U.S. officials say their network morphed into new areas, including the import of medicine, the shipment of oil and smuggling gold from illegal mines in southern Venezuela to buyers in Europe, Africa and the Middle East. "Alex Saab is involved in almost every dirty business in Venezuela," said Carlos Paparoni, an opposition lawmaker who has investigated the businessman since 2017. "Today's sanctions will help make sure that the money belonging to the Venezuelan people is never stolen again."