The states are in a heated war for chilli pepper supremacy, with a surprising level of economic value at stake. 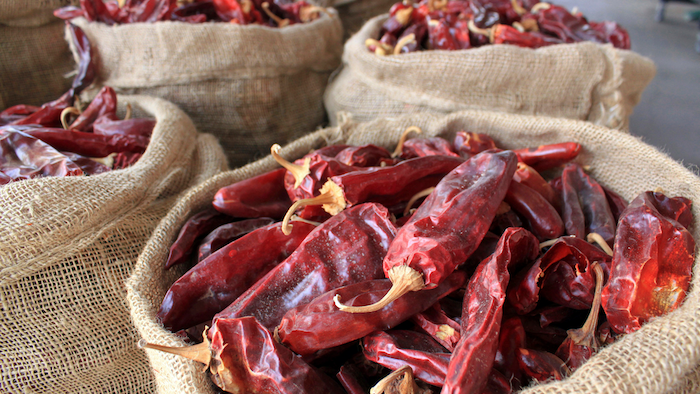 New Mexico Governor Michelle Lujan Grisham says she's ready for a culinary duel with her neighbors to the north after the governor of Colorado proclaimed on social media that chile grown in his state is the best and will be stocked in grocery stores across four Western states. Governor Jared Polis fueled the fiery debate when he said stores in Lujan Grisham's state would be supplied with inferior chile from New Mexico.

"If Colorado wants to go chile to chile, no question that New Mexico can bring the heat — Hatch chile is, has always been and will always be the greatest in the world," Lujan Grisham proclaimed in a tweet. New Mexico's chile peppers have woven their way into the state's cultural identity over centuries, and their distinct flavor has been adopted more recently by palates as far away as Korea.

The state in 2014 even adopted its own trademark and certification program to protect the reputation and integrity of its signature crop, much like Idaho has capitalized on potatoes, Maine has its lobsters and Florida has its fresh fruits and juices.

New Mexico's chile experts contend there's no mistaking its hot peppers. Once a person tastes them or smells them roasting at farmers markets and grocery stores, the craving begins, they say. And there's some science involved, as researchers at New Mexico State University say soil conditions, warmer temperatures, the right amount of water and a longer growing season result in a unique flavor.

According to the university's Chile Pepper Institute, the cultivation of chile peppers likely began 15,000 years ago when the first humans arrived in the Western Hemisphere. People would select them for various traits and new varieties also are easily developed since the plants are good at cross-pollinating.

While the acreage of chile planted in New Mexico is half of what it once was because of labor and irrigation pressures, federal agricultural statistics show the 2018 crop increased four percent from the previous year to 8,400 acres. Value also jumped to nearly $54 million.

In the valleys of southern Colorado, chile has been grown for more than a century, with the elevation and shifts in weather affecting how the peppers taste. Some say they're hotter than New Mexico's varieties.

In 2015, officials in Pueblo County received a grant from the U.S. Department of Agriculture so farmers could form a growers association to better promote their peppers. Since then, Whole Foods opted to go with Pueblo chile for its stores in Colorado and elsewhere in the Rocky Mountain region.

Colorado and New Mexico also both have chile-themed license plates and the towns of Pueblo and Hatch — the rural community in southern New Mexico dubbed the "Chile Capital of the World" — have been hosting annual festivals dedicated to the spicy fruits for decades.

Battles like this between states are not uncommon. Tourism promoters in Arizona and Vermont skirmished in 2013 over which state's fall colors were more impressive. And Lujan Grisham on Thursday threatened to rile anglers when she tweeted about efforts to boost the outdoor recreation economy in northwestern New Mexico. She claimed Montana had nothing on New Mexico's quality fishing waters.

That tweet followed another in which Lujan Grisham posted a photo of a cheesy plate of enchiladas, aiming to set the chile record straight.

"Eat your heart out!" she said.