The move comes in response to a dispute over the Canadian detention of a top executive at the Chinese tech company Huawei. 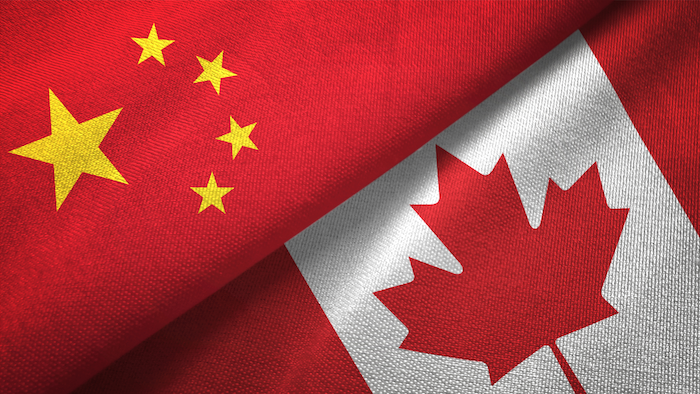 TORONTO (AP) — China is suspending all meat imports from Canada amid their dispute over the Canadian detention of a top executive at the Chinese tech company Huawei. The Chinese Embassy in Ottawa said in a statement on its website Tuesday that the move follows Chinese customs inspectors' detection of residue from a restricted feed additive, called ractopamine, in a batch of Canadian pork products. It is permitted in Canada but banned in China.

"China has taken urgent preventive measures and requested the Canadian government to suspend the issuance of certificates for meat exported to China," the statement said. Meng Wanzhou, the Huawei CFO and daughter of the company's founder, was arrested December 1 in Canada at the request of U.S. authorities, who want to try her on fraud charges.

China then detained two Canadians and sentenced another to death in an apparent attempt to pressure for her release. The latest action against Canada comes as Prime Minister Justin Trudeau heads to Japan for the G-20 summit. U.S. President Donald Trump is expected to meet with his Chinese counterpart amid trade talks.

Meng's arrest set off a diplomatic furor among the three countries, complicating high-stakes U.S.-China trade talks and severely damaging Beijing's relations with Ottawa. Canada wants Trump to speak on behalf of Canada to Chinese President Xi Jinping. The Chinese have refused to talk to senior Canadian government officials, including Trudeau and Foreign Minister Chrystia Freeland. Trudeau had hoped to meet with Xi at the G-20 but that appears unlikely.

Before acting against Canadian meat, China previously stopped importing certain Canadian products like canola. Justine Lesage, a spokeswoman for Canada's agriculture minister, said in a statement that the Canadian Food and Inspection Agency identified an issue involving inauthentic export certificates that could affect the export of pork and beef products to China.

She said the agency has "taken measures to address this issue and is continuing to work closely with industry partners and Chinese officials. The Canadian food system is one of the best in the world and we are confident in the safety of Canadian products and Canadian exports," she said.

Last year, Canada's shipment of just pork to China was worth about $380 million. Guy Saint-Jacques, a former Canadian ambassador to China, said Beijing is clearly putting additional pressure on Canada.

"It is quite disturbing," said Saint-Jacques, who estimated Canada's meat exports to China this year would exceed $760 million. Saint-Jacques said if someone in Canada falsified documents under this kind of scrutiny from the Chinese it needs to be investigated.

"In normal times this would not happen, but in these times China gives Canada no leeway," he said.