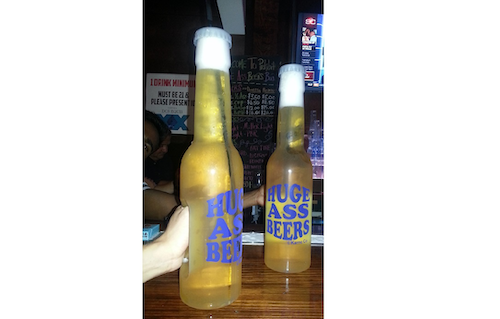 The creator of Huge Ass Beers is suing another string of bars and clubs on Bourbon Street for marketing a rival draft pour as Giant Ass Beer, The New Orleans Advocate reported. Huge Ass Beers is the trademarked name for plus-sized draft beers sold at a trio of related businesses on the famously rambunctious New Orleans street.

The lawsuit in New Orleans federal court alleges trademark infringement and seeks a restraining order barring the sale of Giant Ass Beer, as well as damages. Nicholas S. Karno #1 Inc., a company run by Billie Karno, the operator and landlord for several businesses along the historic street in the French Quarter, filed the suit Tuesday.

Local open-container laws have made Bourbon Street known for novelty to-go drinks in colorful, usually oversized containers that double as marketing materials as patrons stroll the streets carrying them and post photos on social media. The area becomes even more boisterous as thousands flock there during Carnival season, which culminates with Mardi Gras — Fat Tuesday — on March 5.

The "Huge Ass Beers Family of Marks" includes a standard 32-ounce plastic tub, identical to food-service quart containers; a 45-ounce container shaped like a woman's body; a 70-ounce bottle; and a 16-ounce cup, the lawsuit says.

A photo in the suit shows its competitor's large plastic bottle with a label showing a cartoon giant holding a beer mug. The string of businesses named as defendants in the suit are run by Pamela Olano and Guy Olano Jr.  An attorney for Billie Karno said his client had no comment. Representatives of the Olanos did not immediately respond to a request for comment from the newspaper.

The businesses run by Karno and the Olanos are within a few blocks of each other on the most raucous stretch of Bourbon Street. Karno is listed as the owner of several properties the Olanos operate. They're involved in a separate civil lawsuit in which the Olanos accuse their landlord of unfair business practices.

Karno's attorneys allege in the beer cup branding lawsuit that the Olanos began selling Giant Ass Beer as retaliation for the other dispute, describing it as a "soured business relationship."