It's the first new marshmallow for the 'magically delicious' cereal in 10 years. 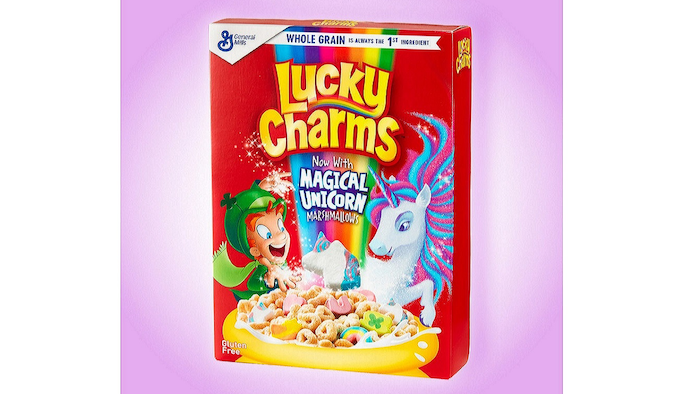 General Mills' Lucky Charms cereal is introducing a new and permanent marshmallow – the magical unicorn. It's the first new marshmallow for the "magically delicious" cereal in 10 years.The final decision on the charm was made by those who enjoy the cereal the most - kids from across the country.

Featuring hues of bright purple and blue, the magical unicorn is the first-ever marshmallow to be inspired and created by kids. However, with the introduction of the unicorn, consumers will have to say goodbye to the hourglass marshmallow, which had been in place for more than a decade. The Lucky Charms marshmallow blend will continue to feature hearts, stars, horseshoes, clovers, blue moons, rainbows and red balloons along with the unicorns.

The cereal makers also like to point out that Lucky Charms is made with whole grain as its first ingredient and fortified with 12 vitamins and minerals. The new unicorn charms have already begun to appear in boxes of Original and Chocolate Lucky Charms cereals and will be available at major grocery retailers and big box stores in March.