The carefully aged rum is considered among the best in the world. 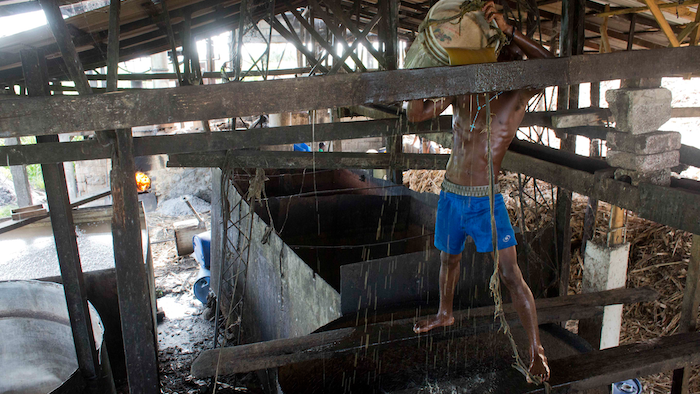 LEOGANE, Haiti (AP) — Haiti's most famous export is Barbancourt, a delicately flavored, carefully aged rum that's considered among the best in the world. Then there's its rustic cousin clairin, a drink that's much cheaper and relatively rare outside this struggling Caribbean country (view photos in gallery).

Clairin, or kleren as it's known in Haitian Creole, is less refined than rum and typically not aged, though some artisanal varieties are subjected to an aging process to give them a more mellow and distinctive flavor. It's produced at hundreds of small distilleries scattered across Haiti.

At one of them, Ti Jean, in the coastal town of Leogane west of the capital, men with their heads covered to ward off the tropical sun use machetes to cut down the towering sugar cane stalks that surround the distillery.

They feed the cane into a grinder to produce the juice that is the raw material of both clairin and the type of rum associated with the French Caribbean. Most rum produced elsewhere is made from molasses.

The juice that flows out the other side is a murky caramel color, though the finished product will be as clear as vodka.

The clairin is fermented and filtered and then shipped in plastic jugs for sale in market stalls and by street merchants. Individual retailers add flavors with herbs or fruit.

In Port-au-Prince, vendor Eddy Lecty adds cloves to spice up the clairin he sells in the capital's Cite Soleil slum. He and his father have been selling the drink for almost 20 years at the same sidewalk spot, which has become a meeting place locals call "The Citizens Club." He says even Haitian presidents have stopped by.

Lecty and other vendors put the clairin into reused whiskey, vodka and soft drink bottles.

In Haiti, like in other countries where unregulated liquor production flourishes, there have been unscrupulous producers who spiked their spirits with methanol, which can be deadly.

Ti Jean owner Jeanty Bonnefois says his workers make sure they remove the toxic methanol byproduct that occurs during distillation, and his clairin has a good reputation among local consumers.

A liter of clairin sells for about $1.36, one-eighth the price of the least expensive bottle of Barbancourt. That price tag makes all the difference in a country where about 60 percent of the people get by on less than $2 a day.