PepsiCo closed the plant in the outskirts of Buenos Aires on June 20, and some of the workers have stayed at the plant since. 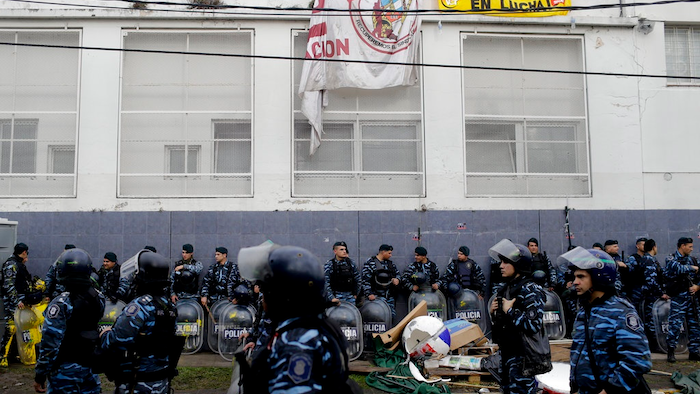 BUENOS AIRES, Argentina (AP) — Hundreds of police and security agents in riot gear clashed on Thursday with former employees and other activists at a recently closed PepsiCo plant in Argentina.

More than 500 people lost jobs when PepsiCo closed the plant in the outskirts of Buenos Aires on June 20, citing "local challenges unique to the plant's residential location, a challenging cost structure and burdensome logistics requirements."

Some of the workers have been occupying the plant since then.

Clashes between police and protesters, who also included union activists, broke out during the eviction. Protesters set up barricades of stones and wooden crates and hauled rocks. Police wielding batons and shields responded with pepper spray.

The Security Minister of Buenos Aires province said that 15 police were injured. Unionists said 15 protesters were injured, but the number could not immediately be confirmed.

"We deeply regret the injuries that have occurred," PepsiCo Argentina said in a statement, adding that authorities had acted "against a small group illegally occupying our Florida plant."

The company said that 455 of the 536 workers who were laid off had accepted a severance agreement.

Union member Luis Medina said the protesters were "PepsiCo workers who are simply proposing the reopening of the plant so we can go back to our jobs and bring back some dignity to our families."