Canada was responding to Trump's claims Tuesday that it had been "very, very unfair" to U.S. dairy farmers. 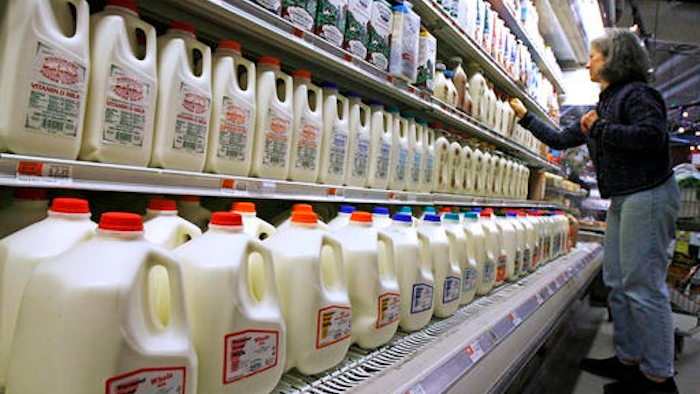 Ambassador David MacNaughton said in a letter to the governors of Wisconsin and New York that Canada is aware of their letter to Trump asking him to address Canadian dairy practices.

"Canada does not accept the contention that Canada's dairy policies are the cause of financial loss for dairy farmers in the United States," MacNaughton said.

He said the facts don't bear that out and attached a U.S. Department of Agriculture dairy outlook report that "clearly indicates the poor results in the U.S. sector are due U.S. and global overproduction."

Trump spoke out against Canada on Tuesday in a way he's not done before, saying Canada has been "very, very unfair" to dairy farmers and "we're going to start working on that."

Canada has decided to impose import taxes on ultra-filtered milk, a protein liquid concentrate used to make cheese. It had been duty free but Canada changed course after milk producers there complained. About 70 dairy producers in both U.S. states are affected.

MacNaughton writes that the Canada dairy industry is less protectionist than that of the U.S, which he says has employed technical barriers to keep Canadian dairy out of the U.S. market.

"It is important that we work together to grow the middle class, and not lay blame where it does not belong," MacNaughton writers.

The U.S. dairy lobby has accused Canada of "systemic disregard" of its trade obligations, while the Canadian industry accused its American rival of "scapegoating."

Canadian Prime Minister Justin Trudeau is worried about Trump's protectionist talk and has sent his ministers to the U.S. to talk about the importance of Canada's trade relationship with the U.S.

When Trudeau visited the White House in February Trump praised the "outstanding" trade relationship between the United States and Canada, saying he would only be "tweaking" it going forward.

Relations with the U.S. are crucial as more than 75 percent of Canada's exports go to the U.S., while 18 percent of U.S. exports go to Canada. There are fears among Canadians that they could be hurt as Trump targets Mexico in a re-negotiation of the North American Free Trade Agreement.