Scientists Hacking Plants to Help Them Use Sunlight Better

Think of it as photosynthesis on steroids. 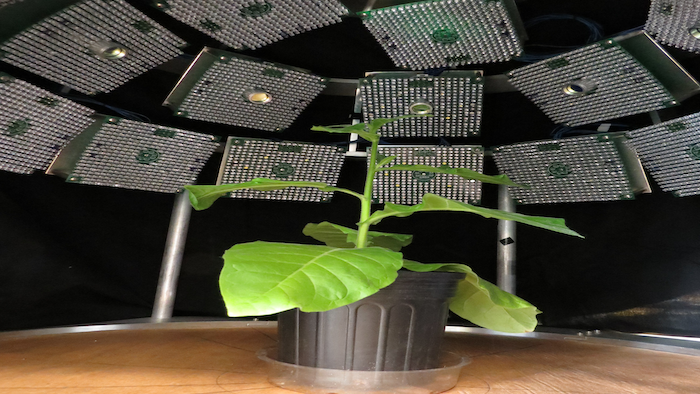 WASHINGTON (AP) — Scientists have hacked a plant's genes to make it use sunlight more efficiently — a breakthrough that could eventually dramatically increase the amount of food grown.

Think of it as photosynthesis on steroids. Photosynthesis is how plants convert sunlight, carbon dioxide and water into food. But it's a very inefficient process, using less than one percent of the energy available, scientists said.

By genetically modifying part of the plant's protective system, which kicks into gear when too much sunlight beams down, scientists were able to increase leaf growth between 14 and 20 percent in experiments with tobacco plants, according to a study published Thursday in the journal Science .

"Now that we know it works, it won't be too difficult to do it with other crops," said study lead author Stephen Long, a professor of crop sciences at the University of Illinois. "If you look at crops around the world, it would (increase yield) many million tons of food."

That's still at least 15 years away, but this is the first time scientists have been able to do something like this, Long said.

A plant's protective system is like a pressure relief valve in a steam engine. When there's too much sunlight, it turns on and gets rid of excess energy safely. When the plant is in the shade, the protective system turns off, but not quickly, said study co-author Krishna Niyogi, a plant scientist at the Howard Hughes Medical Institute and the University of California, Berkeley.

Long said the protective system regulates sunlight in much the same way light-adjusting glasses darken and lighten. But it takes 10 minutes to an hour for plants to adjust, so the plant doesn't get the optimal amount of energy, especially when it goes back into sunlight. So Long and his team genetically modified the plant to turn that protection system off and on faster.

Two different plants in the experiment increased leaf growth by 20 percent and a third by 14 percent. Long said he used tobacco because it is easy to manipulate the genetics, but there is no reason it can't work with rice, corn and other seed-oriented foods. Maybe the yield increase would be only 10 percent, he said.

University of Nebraska-Lincoln agriculture professor Tala Awanda said the study makes sense, but cautioned the yield might not be quite so high for conventional food crops. Still, he added in an email, "this study remains a breakthrough."