The 92-year-old conservative activist Phyllis Schlafly filed suit against her nephew, claiming that trademarking "Schlafly" for his beer company would unfairly associate the family name with alcohol use. 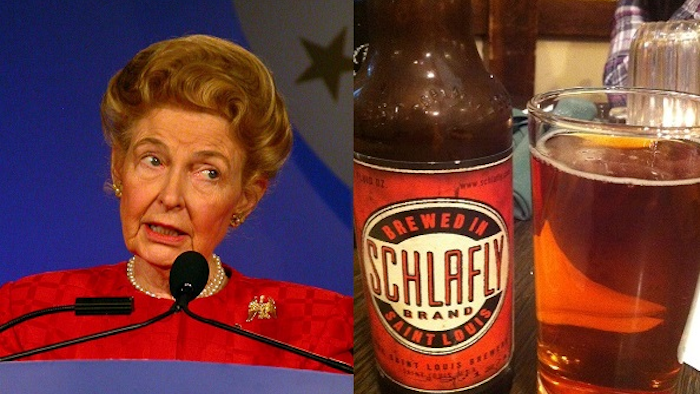 ST. LOUIS (AP) — The U.S. Patent and Trademark Office has sided with the maker of Schlafly beer in its trademark dispute with conservative activist Phyllis Schlafly.

Phyllis Schlafly sought to block St. Louis Brewery's effort to trademark the brand's name, an effort that began in 2012 as its sales began to grow outside of Missouri.

Earlier this month, the Patent and Trademark Office dismissed opposition filed by the St. Louis native and her son, Bruce Schlafly, rejecting the argument that a trademark shouldn't be allowed because it's primarily a surname, the St. Louis Post-Dispatch (http://bit.ly/2aNDQLj ) reported.

"In connection with its usage as a surname, it has the connotation of conservative values, which to millions of Americans (such as Baptists and Mormons) means abstinence from alcohol," according to the filing by Phyllis Schlafly, a longtime conservative activist.

Bruce Schlafly's opposition alleged that trademarking the Schlafly name could negatively impact the orthopedic surgeon's reputation by associating his name with alcohol.

The decision doesn't mean the trademark has been awarded to the brewery, but simply removes an impediment.

The brewery was co-founded in 1991 by Tom Schlafly, who is Phyllis Schlafly's nephew by marriage.

Tom Schlafly told the Post-Dispatch that the decision "shows what we argued all along — that the name has achieved distinctiveness in regards to beer."

"It's a huge relief," Tom Schlafly said. "It guarantees that someone else can't brew beer and call it Schlafly. As we continue to make investments in the business and grow, it provides protection."

Phyllis Schlafly, who will turn 92 on Monday, declined comment, but her son and attorney, Andy Schlafly, said he may appeal.

"I'm disappointed that the decision did not come to terms with the purpose of the statute that generally prohibits obtaining a trademark in a last name," he said.

The voluntary goals finalized Wednesday for 163 foods are intended to help lower the amount of salt people eat.
Oct 13th, 2021
Follow Us
Most Recent