A new law that requires food makers to label the packaging of any products that contain genetically modified ingredients has small and medium-sized manufacturers facing some big decisions. 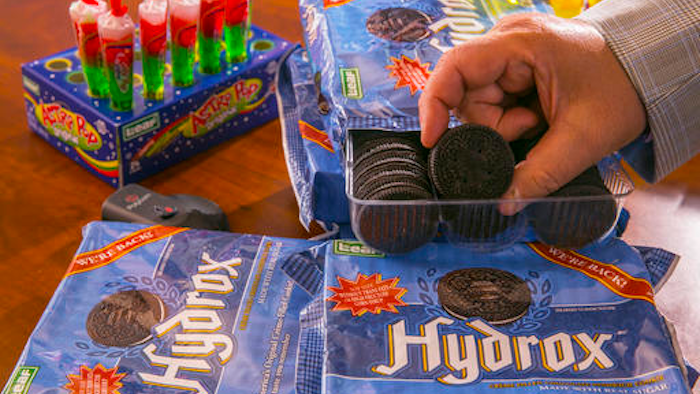 NEW YORK (AP) — Should they try to provide the information on the label itself, or invest in the technology to add scannable codes? Should they change their ingredients to steer clear of such products, and is it worth getting certified as being GMO-free? These are tough questions for companies that may not have financial cushions like bigger businesses to absorb the cost of such changes, which can run into the thousands or tens of thousands of dollars — a considerable amount for a small enterprise.

The law, which President Barack Obama signed last week, requires food manufacturers and producers to disclose whether products contain GMO components, also known as genetically engineered ingredients. Companies can embed the information in a QR code, the square found on some packaging that is read with a smartphone camera.

GMOs have been the subject of much debate. The government and many scientists say they're safe, but opponents believe they can be toxic and cause allergies. Although GMOs have become a staple in many processed food products over the past two decades, many Americans may not realize how widespread they are.

Ellia Kassoff, CEO of Leaf Brands, which makes Hydrox cookies and various candies, is concerned about how the public will react to labels that say its food has GMOs — although the bulk of the nation's corn and soybean crops are now genetically modified.

"It does create this negative feeling with the customer, and I don't know if the majority of customers in the U.S. fully understand the benefits or non-benefits of GMOs," says Kassoff, whose company is based in Newport Beach, California.

But many consumers don't read labels that already display nutritional information like calories, fat and carbohydrates, and they might not read or understand labels that mention GMOs, says Alexander Chernev, a marketing professor at Northwestern University's Kellogg School of Management.

"People don't know if it's good or bad," he says. "In the short term, it's not very likely to change behavior by itself."

A look at the issues surrounding GMOs that small and medium-sized companies face:

A GMO is a plant or animal whose genes have been altered to change how they act or react to the environment. Corn, for example, has been genetically modified to make it resistant to insects and to herbicides used to kill weeds. The Agriculture Department estimates that about 90 percent of the U.S. corn crop is modified against herbicides, and about 80 percent is modified against insects.

According to the government, the majority of plants with GMOs are used to make ingredients like corn starch and syrup and corn, canola and soybean oils and beet sugar. They're also used as livestock feed.

The Food and Drug Administration, which regulates food made from GMOs, has declared them safe, and the nonprofit National Academy of Sciences, in a review of almost 900 scientific studies and reports released this year, "found no substantiated evidence of a difference in risks to human health between current commercially available genetically engineered (GE) crops and conventionally bred crops."

But many groups that oppose GMOs point to studies in the U.S. and other countries that have said food with GMOs can cause some types of cancer or other illnesses. The European Union, relying on such studies, requires GMO foods to be labeled.

The Non-GMO Project, an organization that advocates for the production of more non-GMO food, has said that determining the safety of GMO foods requires studies spanning generations.

How Much to Disclose?

Before the law can take effect, the Agriculture Department must write regulations spelling out what food companies will be required to do to comply. The USDA has two years to do that.

Kassoff isn't sure how Leaf will label its packages, simply because the government hasn't specified what's needed. Depending on the requirements and the size of the package — Leaf's products include small packets of candies — it might not be possible to fit everything in without using the QR code.

Soylent, a protein and carbohydrate drink maker whose website says it's "proudly made with GMOs," favors labels that give details on how GMOs are used so consumers can be well-informed about what they're eating.

"Simply saying on the label 'Made with genetically engineered' ingredients is probably not enough," says Samy Hamdouche, the Los Angeles-based company's vice president of research.

Some companies have decided to stop using GMO ingredients rather than risk doubts in consumers' minds. Others are going further, seeking a certification from the Non-GMO Project that their food is made completely without GMOs, and getting to use a logo on their packages.

"Our consumers are the types that value certification of non-GMOs to reassure them they're getting the highest-quality ingredients," says Jonathan Davis, a senior vice president of Los Angeles-based bread maker La Brea Bakery. The company has always sought non-GMO ingredients, he says, and it plans to be completely non-GMO by the end of this year.

But some companies may not be able to afford to phase out GMO ingredients because the supply of non-GMO versions is limited.

"In some cases it's hard to acquire non-GMO ingredients and sell a product at a price where consumers will buy it," Kassoff says. If Hydrox cookies were reformulated to be GMO-free, he says, a package would cost 50 cents more than Oreos, the cookie's biggest competitor.

Kar's Nuts has Non-GMO Project certification for its Second Nature line of snack mixes, but some of the ingredients in its Kar's line do contain GMOs, says Nick Nicolay, the company's president. Finding replacements would drive up his costs.

"It's a little unrealistic for us at this time," says Nicolay, whose company is located in Madison Heights, Michigan. However, the company says going completely non-GMO is something it will consider in the future.

Deep River Snacks doesn't use GMO ingredients and almost all its products have been certified by the Non-GMO Project. Founder Jim Goldberg says the Deep River, Connecticut, company is still trying to get certification for two potato chip flavors and one tortilla chip flavor that are dairy; that takes verification from its suppliers that the cows whose milk is used weren't given feed with GMOs.

"This is about consumers wanting to know what they're eating," he says.