The sanctions ban sales of natural gas to North Korea and purchases of the North's textile exports, another key revenue source. 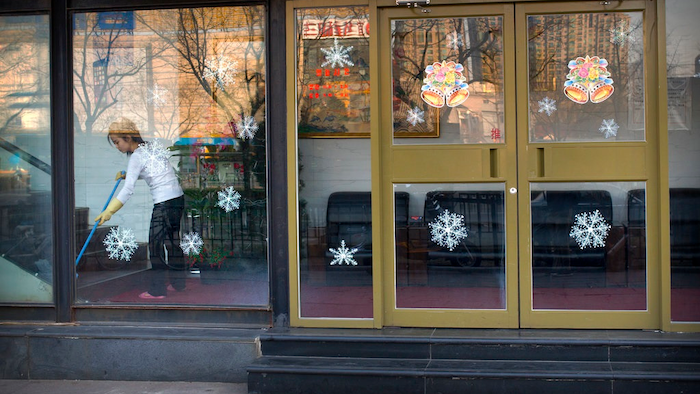 In this Feb. 17, 2016 file photo, a worker sweeps the floor inside a branch of the North Korean-operated Haedanghwa restaurant in Beijing. Chinese news reports Thursday, Sept. 28, 2017, say the government has ordered most North Korean-owned businesses and ventures with Chinese partners to close under U.N. sanctions imposed over the North's nuclear and missile programs.
AP Photo/Mark Schiefelbein, File

North Korean businesses and ventures with Chinese partners must close within 120 days of the U.N. Security Council's Sept. 11 approval of the latest sanctions, according to the Ministry of Commerce. That would be early January.

North Korean companies operate restaurants and other ventures in China, helping to provide the North with foreign currency. North Korean laborers work in Chinese factories and other businesses.

China, one of five permanent Security Council members with veto power, supports the latest sanctions but doesn't want to push North Korea too hard for fear Kim's government might collapse.

Chinese leaders argue against doing anything that might hurt ordinary North Koreans. They agreed to the latest sanctions after the United States toned down a proposal for a total ban on oil exports to the North.

Chinese officials complain their country bears the cost of enforcing sanctions, which have hurt businesses in its northeast that trade with the North.

The latest round of U.N. sanctions bans member countries from operating joint ventures with North Korea, most of which are in China.

They also ban sales of natural gas to North Korea and purchases of the North's textile exports, another key revenue source. They order other nations to limit fuel supplies to the North.

China, which provides the bulk of North Korea's energy supplies, announced Saturday it would cut off gas and limit shipments of refined petroleum products, effective Jan. 1. It made no mention of crude oil, which makes up the bulk of Chinese energy supplies to North Korea and is not covered by the U.N. sanctions.

On Thursday, the Ministry of Commerce defended its recent imports of North Korean coal, saying they were permitted by U.N. sanctions.

A ministry spokesman, Gao Feng, said imports that were reported in August trade data were allowed by a "grace period" for goods that arrived before the U.N. ban took effect.

The imports are "in line with the (U.N.) resolution," Gao said.