The pair of immigrant dairy farmers were arrested after marching to a Ben & Jerry's factory to call for better pay and living conditions. 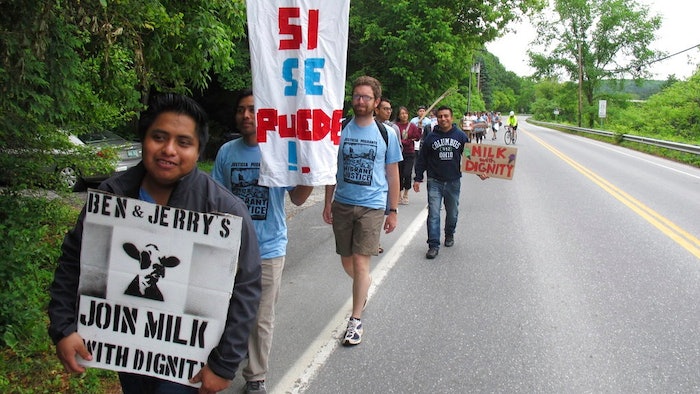 Scores of dairy farm workers and activists marching in Montpelier, Vt., on Saturday June, 17, 2017. They were marching to the main Ben & Jerry's factory in the Vermont town of Waterbury to protest what they feel are slow negotiations to reach a deal on their "Milk with Dignity" program that would ensure fair wages and living conditions. Ben & Jerry's spokesman Sean Greenwood says the company is committed to reaching a deal with workers.
AP Photo/Wilson Ring

ST. ALBANS, Vt. (AP) — Protesters are showing support for two immigrant dairy farmers arrested after marching to a Ben & Jerry's factory to call for better pay and living conditions on farms that provide milk to the ice cream maker.

The Vermont Department of Corrections said Monday that 19-year-old Yesenia Hernandez-Ramos and 26-year-old Esau Peche-Ventura, both from Mexico, are being held on immigration charges. They were arrested Saturday night while returning to the farm where they live and work in Franklin County.

A U.S. Border Patrol spokesman tells Vermont Public Radio (http://bit.ly/2siOt4h) they were stopped in a routine patrol check a few miles away from the U.S.-Canada border.

Protesters were outside a correctional facility and a U.S. Immigration and Customs Enforcement office.