Coca-Cola Co. has also said it's working on reformulating some drinks and more aggressively marketing options like Coke Zero to bring down its global "sugar footprint." 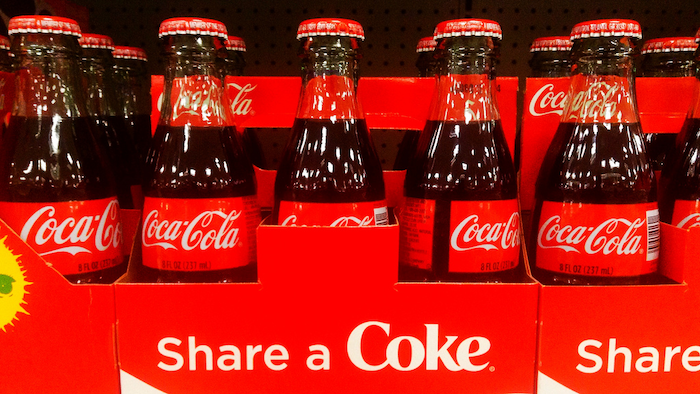 NEW YORK (AP) — Coke says it supports the World Health Organization's guidelines for limiting added sugar, as the company works on repairing its image in public health circles and reshaping its business.

Incoming CEO James Quincey also said the company has "outgrown" its namesake cola and is focusing on becoming a "total beverage company." Speaking at an industry conference in Boca Raton, Florida, he noted other categories, such as bottled waters and teas, are growing more quickly than sodas globally.

In some cases, a Coke drink could still account for the entirety of a person's daily sugar intake under the WHO guidelines, which recommend people limit added sugar to 10 percent of their total daily calories. For someone consuming an average of 2,400 calories a day, a 20-ounce bottle of Coke — which has 65 grams of sugar and 240 calories — would use up that limit.

In recent years, however, Coke has increasingly touted its smaller cans and bottles that executives say help people with their desire for portion control. To analysts, Coca-Cola also notes that such packages are more profitable and can increase how often Coke products are purchased. The company says such smaller packages now account for about 15 percent of its carbonated drink transactions in North America.

Coca-Cola Co., based in Atlanta, has also said it's working on reformulating some drinks and more aggressively marketing options like Coke Zero to bring down its global "sugar footprint." It noted that people could drink several servings of its products and stay within the guidelines.

The maker of Fanta, Powerade and Smartwater, which has felt pressure from local proposals for special taxes on sugary drinks, isn't alone in seeking to align itself with public health officials. Candy maker Mars has also supported the WHO guidelines, and last year criticized a study funded by a food industry group that questioned the scientific rigor behind such recommendations on limiting sugar.

Coke and Mars are both members of that group, the International Life Sciences Institute. Emails from 2015 obtained by The Associated Press through a public records request show Coke and Mars executives, along with executives at many other food and beverage companies, were copied on messages planning for the study. On Thursday, Coke said it would likely not participate in supporting a study that may undermine recommendations from leading public health authorities.

As part of its commitment to the WHO guidelines, Mars has also said that it is working with its retail clients to ensure its products are used in ways that are within the sugar recommendations. That includes places such as McDonald's, which serve McFlurry drinks with Mars candy mixed in.

When asked if it would do the same with movie theaters and other places that serve its sodas — often in generous sizes — Coca-Cola said it is encouraging customers "to examine the serving sizes they offer to consumers." It also noted that it's working to offer a wide range of "low- and no-sugar beverages."