Rice farming is almost sacred in rural Japan, and the government protects farmers with tight restrictions on imports. Many farmers are too close to the nuclear disaster to return to the fields, but others have gotten the go-ahead, even with the risk their harvests may end up being too radiated to ship. 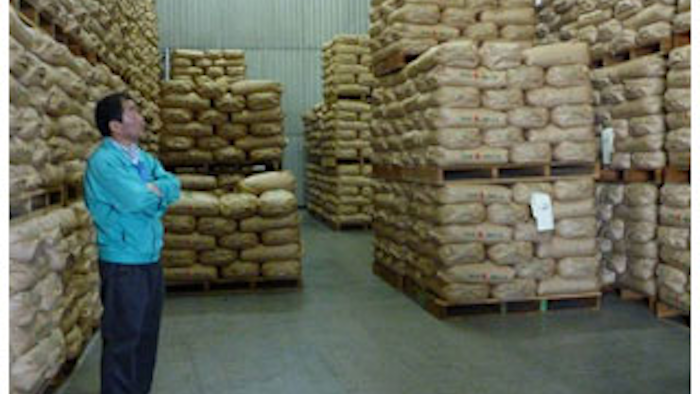 FUKUSHIMA, Japan (AP) — Last year's crop sits in storage, deemed unsafe to eat, but Toraaki Ogata is back at his rice paddies, driving his tractor trailing neat rows of seedlings. He's living up to his family's proud, six-generation history of rice farming, and praying that this time his harvest will not have too much radiation to sell.

That conflict is shared by several thousand farmers in more than 7,000 hectares (17,000 acres) of Fukushima, where some of last year's harvest exceeded government safety standards because of radiation released when the March 2011 tsunami set off the world's second-worst nuclear accident.

For their rice to be sold, it will have to be tested — every grain of it.

"All I can do is pray there will be no radiation," Ogata, 58, said last week, wiping his sweat during a break in his 1.5-hectare paddy 60 kilometers (35 miles) from the Fukushima Dai-ichi nuclear plant. "It's not our fault at all, but the land of our ancestors has been defiled."

Rice farming is almost sacred in rural Japan, and the government protects farmers with tight restrictions on imports. Many farmers are too close to the nuclear disaster to return to the fields, but others have gotten the go-ahead, even with the risk their harvests may end up being too radiated to ship.

Hopes are high in this major agricultural northeastern prefecture (state) that farmers will meet the unprecedented challenge of producing safe-to-eat rice in contaminated soil.

Following orders from the government, they have sprinkled zeolite, a pebble-like material that traps radioactive cesium, and added fertilizer with potassium to help block radiation absorption. That work is part of the 100 billion yen ($1.3 billion) Tokyo has allocated for decontamination efforts this year.

There had been no time for that last year. Tens of thousands of bags of rice from that harvest were too radiated to be sold. The government bought those crops, which sit in giant mounds in storage.

Rice planting has been banned in the most contaminated areas, but the government allowed it at some farms in areas that produced contaminated rice last year, including Ogata's. After the October harvest, their rice will be run through special machines that can detect the tiniest speck of radiation.

Ogata is filled with uncertainty. Though the government recently set up a system to buy and destroy his crop from last year, he has no assurances that it will do so again if this year's rice can't be eaten.

He also doesn't know which experts to believe. Scientists often come to Fukushima to discuss radiation at neighborhood meetings, but some say there will be no health effects at all, while others say tens of thousands may get sick.

Radiation is expected to decline year by year. But Ogata and other farmers acknowledge they are in for a long haul.

Japan has a safety limit of radiation exposure at 1 millisievert per year, although some areas in Fukushima measure higher at about 20 millisieverts. A 20-kilometer (12-mile) no-go zone was set around the nuclear plant, displacing some 100,000 people.

Right next to the no-go zone, in Minami Soma, 135 farms have been granted special permission to plant rice as an experiment but on the condition that all rice, regardless of radiation levels, will be destroyed.

"We couldn't even plant last year. We are doing everything we can as a whole town so we will be growing rice next year," said Yukio Nishi, a Minami Soma agricultural cooperative official.

The government toughened its restrictions on radiation in rice and other food from April to 100 becquerels a kilogram (2 pounds) from the emergency 500 becquerels set in March last year. The limits are lower for milk, baby food and drinking water.

Medical experts say risks from low-dose radiation can't be ruled out, but it may be impossible to prove whether a person got cancer from radiation or something else.

Exposure is cumulative and differs among individuals, depending on size and age, diet and habits. Certain foods, such as mushrooms and bamboo shoots, tend to be high in radition. And children are more susceptible to radiation-related sicknesses.

"The balance that the government is now trying to strike is between allowing people to stay in the Fukushima area and recover their lives, and keeping the rest of Japan happy about buying food," said Edward Lazo, who advises Fukushima as a radiation expert at the Organization for Economic Cooperation and Development's Nuclear Energy Agency. "And that's a really difficult job."

Christopher Clement, an expert at the International Commission on Radiological Protection, a global nonprofit authority on radiation health, says the food standards in Fukushima are safe. They are lower than the maximums set in Europe after Chernobyl.

Still, people across Japan — and even in Fukushima — are shunning food grown here, though Takeshi Takagi, a manager at the York Benimaru supermarket chain, said customers are gradually returning to locally grown produce.

York Benimaru has clearly labeled shelves for Fukushima-grown food, and bright banners encouraging shoppers to support local farmers. But some pass right by.

"We have our rice shipped from outside Fukushima," said Tomohiko Hashimoto, a 30-year-old house-husband, strolling his infant son through the aisles. "We're careful about what the mother eats, too. She is breastfeeding."

Last year's sales of Fukushima vegetables and fruit on the Tokyo wholesale market were 20 percent lower than the 2010 total, according to Metropolitan Central Wholesale Market data. Masataka Kase, spokesman for Tokyo Seika Co., a major wholesaler, said the drop came from crop damage from the disaster, shipment bans for radiation and consumer fears about Fukushima.

Ogata won't need to sell his rice to skeptics. He plans to sell some of his 10,000 kilograms (22,000 pounds) of rice direct to customers he has cultivated for years, families who live in the area. The rest he will sell to a local farming cooperative that distributes to corporate buyers, such as restaurants, that are more willing to buy Fukushima rice.

A handful of farmers are giving up on growing rice. Some are switching to flowers, which don't require radiation checks. Others are suing Tokyo Electric Power Co., the utility that operates Fukushima Dai-ichi, for damages.

Fukushima farmer Shoichi Watanabe is angry he even has to worry about radiation.

"See how peaceful this place is," he said, pointing to paddies filled with gently croaking frogs. "I want to say at the top of my lungs that we would not be going through all this suffering — if only Tokyo Electric had done its job right."