First Lady Michelle Obama's White House vegetable garden is more diverse this spring with a new grain variety and fruit tree and an emphasis on pollination. The garden was initiated in 2009 to encourage the national discussion about healthier eating and living. 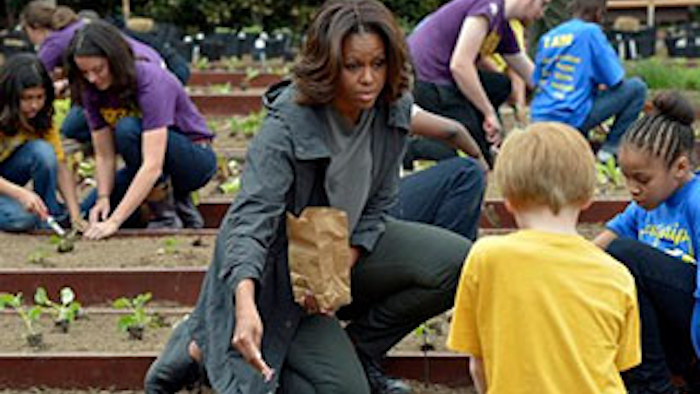 WASHINGTON (AP) — Spring has sprung at the White House and soon the vegetables will, too.

With lots of helping hands on Wednesday, Michelle Obama replanted her fruit and vegetable garden on the South Lawn.

New this year is a pollinator garden, an area with a variety of flowers that were chosen to help encourage the production of bees and Monarch butterflies to help spread pollen, Mrs. Obama told about two dozen students from four local schools who were invited to help with the sixth annual garden planting.

"We're going to plant all kinds of flowers that attract bees and butterflies, which is not going to make the Obama girls happy because they don't really like bees," she said of her daughters, Malia, 15, and Sasha, 12. "But bees are good. Bees are a good thing."

Other additions to the garden are oats, specifically a variety known as Lincoln Oats, and a paw paw tree. The paw paw fruit is native to the eastern part of the country and has a soft, orange flesh that tastes like the mash-up of a banana and a mango.

Mrs. Obama's planting effort also was aided by the founders of FoodCorps, which is part of the AmeriCorps national service program, and six of its volunteers. FoodCorps teaches K-12 students where healthy food comes from, how it grows and helps make sure they have regular access to it. Volunteers spend a year working in needy communities.

The first lady planted the garden in 2009, the first one at the White House in decades, to help spur a national conversation about healthier eating and living. A year later, in 2010, that conversation led her to launch "Let's Move," her nationwide initiative to reduce childhood obesity rates and improve the health of the nation's children.

Since 2009, the garden has produced thousands of pounds of produce, some of which the White House donates to a local soup kitchen.