EU Plans To Restrict Pesticide Use To Protect Bees

The European Union plans to restrict the use of three pesticides to better protect dwindling bee populations. The announcement Monday was cheered by environmentalists, disappointed chemical companies and came after the bloc's 27 nations failed to agree on a common stand. 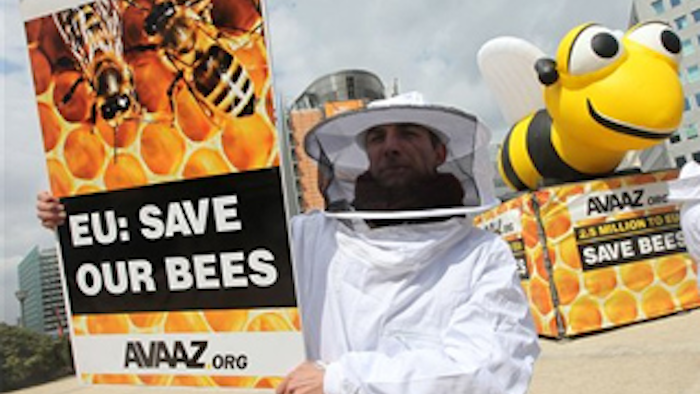 BRUSSELS (AP) — The European Union plans to restrict the use of three pesticides to better protect dwindling bee populations.

The announcement Monday was cheered by environmentalists, disappointed chemical companies and came after the bloc's 27 nations failed to agree on a common stand.

Beekeepers have reported an unusual decline in bees over the past decade, particularly in Western Europe, according to the European Food Safety Authority. It says bees are critically important to the environment, sustaining biodiversity by providing pollination for a wide range of crops and wild plants — including most of the food crops in Europe.

In all, 15 EU nations were for the restrictions, eight were against and four abstained. Borg said he still felt confident in moving ahead because "a majority of member states now support our proposal."

"Today's pesticide ban throws Europe's bees a vital lifeline," said Iain Keith of the Avaaz environmental group. "Europe is taking science seriously and must now put the full ban in place to give bees the breathing space they need."

But major chemical companies, which were against Borg's proposals, have questioned the scientific evidence for such a ban.

The head of the EU Parliament's environmental committee acknowledged that "precise data is still lacking" but applauded the consumer agency's action.

"We shall now try to understand how exactly neonicotinoids affect the behavior of bees," said Matthias Groote.