The study, which appears in the journal Proceedings of the National Academy of Sciences, paints the highest resolution picture yet of how groundwater depletion varies across space and time in California's Central Valley and the High Plains of the central U.S. Researchers hope this information will enable more sustainable use of water in these areas, although they think irrigated agriculture may be unsustainable in some parts. 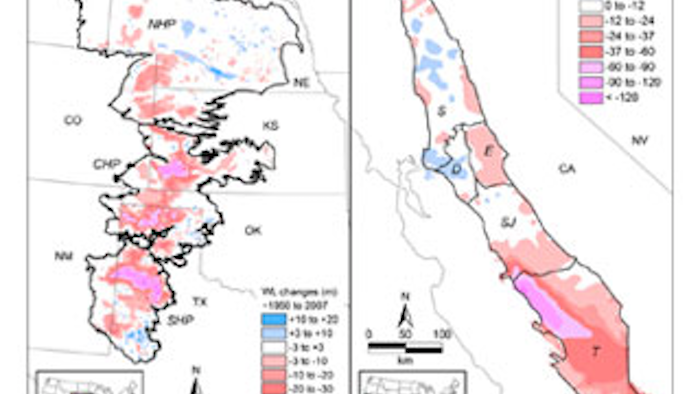 (Newswise) — The nation's food supply may be vulnerable to rapid groundwater depletion from irrigated agriculture, according to a new study by researchers at The University of Texas at Austin and elsewhere.

The study, which appears in the journal Proceedings of the National Academy of Sciences, paints the highest resolution picture yet of how groundwater depletion varies across space and time in California's Central Valley and the High Plains of the central U.S. Researchers hope this information will enable more sustainable use of water in these areas, although they think irrigated agriculture may be unsustainable in some parts.

"We're already seeing changes in both areas," said Bridget Scanlon, senior research scientist at The University of Texas at Austin's Bureau of Economic Geology and lead author of the study. "We're seeing decreases in rural populations in the High Plains. Increasing urbanization is replacing farms in the Central Valley. And during droughts some farmers are forced to fallow their land. These trends will only accelerate as water scarcity issues become more severe."

Three results of the new study are particularly striking: First, during the most recent drought in California's Central Valley, from 2006 to 2009, farmers in the south depleted enough groundwater to fill the nation's largest man-made reservoir, Lake Mead near Las Vegas—a level of groundwater depletion that is unsustainable at current recharge rates.

Second, a third of the groundwater depletion in the High Plains occurs in just 4% of the land area. And third, the researchers project that if current trends continue some parts of the southern High Plains that currently support irrigated agriculture, mostly in the Texas Panhandle and western Kansas, will be unable to do so within a few decades.

California's Central Valley is sometimes called the nation's "fruit and vegetable basket." The High Plains, which run from northwest Texas to southern Wyoming and South Dakota, are sometimes called the country's "grain basket." Combined, these two regions produced agricultural products worth $56 billion in 2007, accounting for much of the nation's food production. They also account for half of all groundwater depletion in the U.S., mainly as a result of irrigating crops.

In the early 20th century, farmers in California's Central Valley began pumping groundwater to irrigate their crops. Over time, groundwater levels dropped as much as 400 feet in some places. From the 1930s to ’70s, state and federal agencies built a system of dams, reservoirs and canals to transfer water from the relatively water-rich north to the very dry south. Since then, groundwater levels in some areas have risen as much as 300 feet. In the High Plains, farmers first began large-scale pumping of groundwater for crop irrigation in the 1930s and ’40s; but irrigation greatly expanded in response to the 1950s drought. Since then, groundwater levels there have steadily declined, in some places more than 150 feet.

Scanlon and her colleagues at the U.S. Geological Survey and the Université de Rennes in France used water level records from thousands of wells, data from NASA's GRACE satellites, and computer models to study groundwater depletion in the two regions.

GRACE satellites monitor changes in Earth’s gravity field which are controlled primarily by variations in water storage. Byron Tapley, director of the university's Center for Space Research, led the development of the GRACE satellites, which recently celebrated their 10th anniversary.

Scanlon and her colleagues suggested several ways to make irrigated agriculture in the Central Valley more sustainable: Replace flood irrigation systems (used on about half of crops) with more efficient sprinkle and drip systems and expand the practice of groundwater banking—storing excess surface water in times of plenty in the same natural aquifers that supply groundwater for irrigation. Groundwater banks currently store 2 to 3 cubic kilometers of water in California, similar to or greater than storage capacities of many of the large surface water reservoirs in the state. Groundwater banks provide a valuable approach for evening out water supplies during climate extremes ranging from droughts to floods.

"Basically irrigated agriculture in much of the southern High Plains is unsustainable," said Scanlon.

Dicamba is used on tens of millions of acres of soybeans and cotton nationwide.
Jun 5th, 2020
Follow Us
Most Recent