Amid California's driest year on record, the nation's leading agricultural region is locked in drought and bracing for unemployment to soar, sending farm workers to food lines in a place famous for its abundance. One-third of the Central Valley's jobs are related to farming. 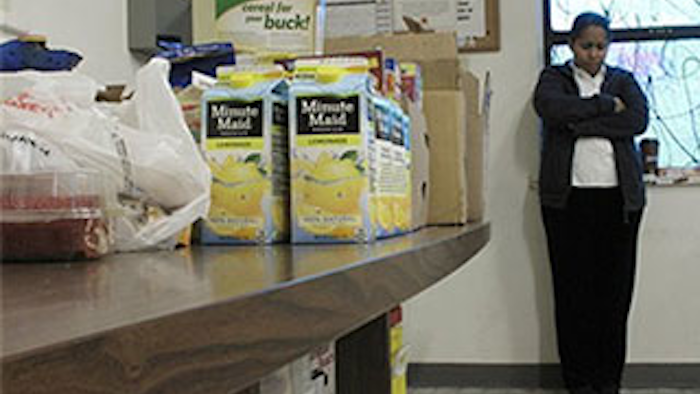 MENDOTA, Calif. (AP) — Amid California's driest year on record, the nation's leading agricultural region is locked in drought and bracing for unemployment to soar, sending farm workers to food lines in a place famous for its abundance.

One-third of the Central Valley's jobs are related to farming. Strains on water supplies are expected to force farmers to leave fields unplanted, creating a ripple effect on food processing plant workers, truck drivers and those who sell fertilizer, irrigation equipment and tractors.

No place may be harder hit than Mendota, a small farm town where unemployment rose above 40 percent at the height of the economic recession in 2009, also a dry year. Mayor Robert Silva said he fears this year could be even worse.

Residents of Mendota late last year began seeing tough times on the horizon when little rain fell in the valley and snow didn't blanket the High Sierra. This marks the third consecutive dry year for California, and Gov. Jerry Brown has declared a drought emergency.

This past week, the snow pack's water content was measured at 12 percent of normal. State officials announced that they would not be sending water to California's agricultural customers. U.S. officials are expected in late February to announce they will allot only a fraction of the federally controlled water that farmers want, if any.

If that scenario plays out, Silva estimates the lines they saw outside a Mendota food bank five years ago could run three times as long this year. His town's unemployment today is at 34 percent — the highest in Fresno County — and interim City Manager Don Pauley figures it will top 50 percent.

Officials at Mendota's City Hall aren't the only uneasy ones. Steve Malanca, general manager at Thomason Tractor in Firebaugh, said farmers have already told him that digging deeper wells and buying irrigation water are higher priorities in 2014 than investing in new farm equipment from him. With reduced work in the fields, Malanca said it's clear he will have to lay off some of his 49 employees.

The ripple effect of drought extends to the trucking companies that haul crops, tire companies that outfit the big rigs and fuel suppliers who provide diesel, he said. Employees at John Deere world headquarters in Moline, Ill., will feel repercussions from drought in California, the biggest agricultural producer, he said. So will the businesses that make cardboard boxes to hold cantaloupes and the wooden pallets for stacking the boxes, Malanca said. The list goes on.

"When you make a hay bale, you've got to tie that bale with string," he said. "The supplier who made that string, he's going to be out of work, too."

A 2012 study by the Agricultural Issues Center at the University of California, Davis, found that farming and food processing industries created nearly 38 percent of all Central Valley jobs. Every 100 farm and processing jobs create work for another 92 people, said the report, which measured agriculture's impact on the state's economy.

Fresno County led the nation in farming in 2012, generating nearly $6.6 billion in economic activity, said Ryan Jacobsen, executive director of the Fresno County Farm Bureau. With no surface water for farmers, he anticipates that up to 25 percent of irrigated field and orchards in the county will lay unplanted.

This time of year, farmers start to plant tomatoes for use as paste and spaghetti sauce. Next come onions, garlic and cotton, which are among some 400 variety of crops grown in Fresno County. Farmers may have no choice but to rip out permanent crops, such as almond orchards and vineyards that take years to mature, or let them dry up with no irrigation.

Jacobsen said the three months left in the rainy season are not likely to rescue the year from drought. "We're right on the front edge of it," he said. "It's going to worsen, worsen, worsen."

In a good year, Chuck Herrin, owner of Sunrise Farm Labor, based in Huron, puts between 1,000 to 3,500 people to work. He said he will be lucky to hire 600 at the season's peak, installing drip irrigation systems, planting and harvesting crops.

Workers he can't put on the payroll will be forced to stand in food lines to feed themselves and their families, Herrin said. "By August, September, October, this will be a very tragic looking place," he said.

His worry is echoed at the Los Banos Salvation Army, where residents gather each weekday for a spiritual devotion before waiting to hear their names called to collect a bag of donated food. Felicia Grant, a lieutenant at the Salvation Army, fears that the drought will be so severe that middle class families will need free food along with the farm workers. She hopes that they're not afraid to ask for help when the time comes.

Rick Palermo of Community Food Bank in Fresno recently drove to Mendota, Firebaugh and other rural communities in the Central Valley, scouting places to hand out food. He's been on the phone with state officials gearing up for the high unemployment expected from drought-related job losses. In 2009, the last bad year, his food bank, located in a massive warehouse in an industrial area of Fresno, provided families with 10 million pounds of food.

While praying for a miracle, he's trying to estimate how much will be needed to feed masses of unemployed farm workers this time around.

"We're all doing our rain dance, hoping it doesn't come to that," he said. "Hopefully, the water comes, but if it doesn't, we'll be ready."