Wild bumblebees worldwide are in trouble, likely contracting deadly diseases from their commercialized honeybee cousins. That's a problem because bumblebees provide a significant chunk of the world's pollination of flowers and food, especially greenhouse tomatoes. 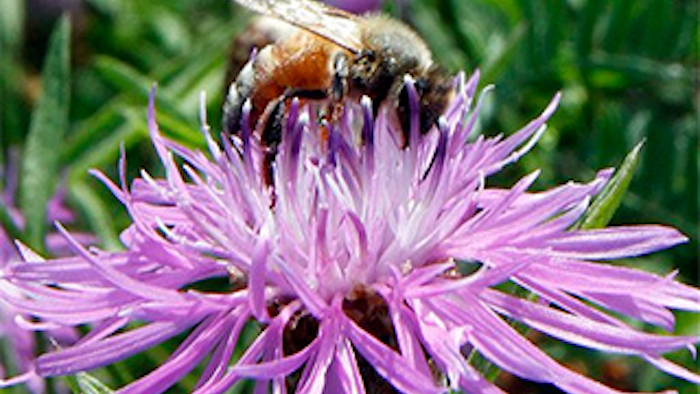 That's a problem even though bumblebees aren't trucked from farm to farm like honeybees. They provide a significant chunk of the world's pollination of flowers and food, especially greenhouse tomatoes, insect experts said. And the ailments are hurting bumblebees even more, according to a study published Wednesday in the journal Nature.

"Wild populations of bumblebees appear to be in significant decline across Europe, North America, South America and also in Asia," said study author Mark Brown of the University of London. He said his study confirmed that a major source of the decline was "the spillover of parasites and pathogens and disease" from managed honeybee hives.

Smaller studies have shown disease going back and forth between the two kinds of bees. Brown said his is the first to look at the problem in a larger country-wide scale and include three diseases and parasites. The study tracked nearly 750 bees in 26 sites throughout Great Britain. And it also did lab work on captive bees to show disease spread.

What the study shows is that "the spillover for bees is turning into (a) boilover," University of Illinois entomology professor May Berenbaum, who wasn't part of the study, said in an email.

Study co-author Matthias Furst of the University of London said the team's research does not definitely prove the diseases go from honeybees to bumblebees. But the evidence points heavily in that direction because virus levels and infection rates are higher in the honeybees, he said.

Bumblebees probably pick up diseases when they go to flowers after infected honeybees, Furst said. And sometimes bumblebees invade honeybee hives and steal nectar, getting diseases that way, he added.

Bumblebees can be nearly twice as big as honeybees, can sting multiple times and don't produce surplus honey, like honeybees.

The latest research shows bumblebees are hurt more by disease, Brown said. In general, the average wild bumblebee lives 21 days, but the infected ones live closer to 15 days, he said. And while honeybee hives have tens of thousands of workers and can afford to lose some, bumblebee hives only have hundreds at the most.

"It's like Wal-Mart versus a mom-and-pop store," Berenbaum said in an interview.

Studies have shown that bumblebees provide $3 billion worth of fruit and flower pollination in the United States, while honeybees are closer to $20 billion, Berenbaum said.

The chocolate-maker is expanding its Cocoa For Good program, committing to 100 percent direct-sourced cocoa in high-risk areas by 2025.
May 29th, 2020

Batory Foods will become the authorized licensed distributor of the Ingredion's ingredient solutions in Southern California.
May 28th, 2020

The beverage has prehistoric roots.
May 15th, 2020

Lasers and vibrations can reliably assess fruits' ripeness.
May 8th, 2020

As health-conscious consumers become more educated about their food, more manufacturers are turning to a natural way of preserving food and extending shelf life.
Apr 14th, 2020

The move was widely praised by farmers, who view the weedkiller as a new tool in an ever-increasing battle with “super weeds.”
Apr 13th, 2020
Follow Us
Most Recent