Even compared with 2019, a year before the pandemic hit the US, same-store sales were 7% higher. 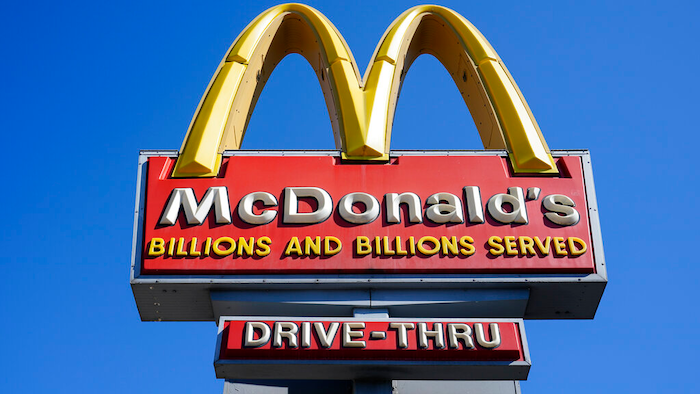 A McDonald's sign is shown in Philadelphia on April 26.
AP Photo/Matt Rourke

Revenue jumped 57% to nearly $5.9 billion in the April-June period. That beat Wall Street’s forecast of $5.6 billion, according to analysts polled by FactSet.

Global same-store sales, or sales at locations open at least a year, rose 40.5% from the same period a year ago. It was an easy comparison; the second quarter of 2020 was the low point of the pandemic for McDonald’s, when lockdowns shuttered stores and sales plunged 30%.

But even compared with 2019, a year before the pandemic hit the U.S., same-store sales were 7% higher.

The reopening of dining rooms globally brought McDonald's closer to what would be considered a pre-pandemic normal. The United Kingdom reopened dining rooms in May, while France and Germany reopened them in June, McDonald's said. In the U.S., 70% of dining rooms are now open, and the company expects all to be open by Labor Day barring a resurgence of the coronavirus.

There were still some hiccups, like a COVID resurgence that limited operations at restaurants in Southern China.

There has also been a resurgence of infections in some regions of the U.S., namely in places where more people are hesitant to become vaccinated.

New menu items __ like the crispy chicken sandwich in the U.S. and the McSpicy in Australia and the United Kingdom __ drove sales. A global meal promotion with the South Korean pop band BTS __ the latest in a series that has also included a meal from rapper Travis Scott __ was also a huge success. CEO Chris Kempczinski said the company is planning more celebrity tie-ins but also new ways to generate buzz around the brand.

“My challenge to our marketing team here at McDonald’s is what’s the next great idea,” he said.

The company also raised prices by 6% compared with last year to offset higher food and labor costs, and that too boosted sales.

Attracting workers has been a challenge coming out of the pandemic in the U.S. as well as Europe, where border restrictions have limited the supply of workers, Kempczinski said.

Like other national chains McDonald's has raised pay to attract workers. In May, McDonald's announced it would hike pay at its 650 U.S. company-owned stores to $15 per hour by 2024. Including franchise-owned locations, McDonald's pay is up 5% this year, Kempczinski said.

The company is seeing a growing number of job applications in the U.S., particularly in states like Florida and Missouri that ended enhanced unemployment benefits in June, Kempckinsi said. In other states, those benefits end in September.

“I do think that there is evidence that as the federal stimulus rolls off, that you’ll see an improvement in the application rate,” Kempczinski said.

Because it has been so hard to find enough workers, the average order time took 3 additional seconds, Kempczinski said, but he believes that is a short-term problem. The company has actually improved service times by 30 seconds over the last few years.

"The gains were too hard fought,” Kempczinski said.

The Chicago burger giant had a net income of $2.2 billion for the second quarter. Adjusted for one-time items, the company earned $2.37 per share. That was well above the $2.11 Wall Street had forecast.