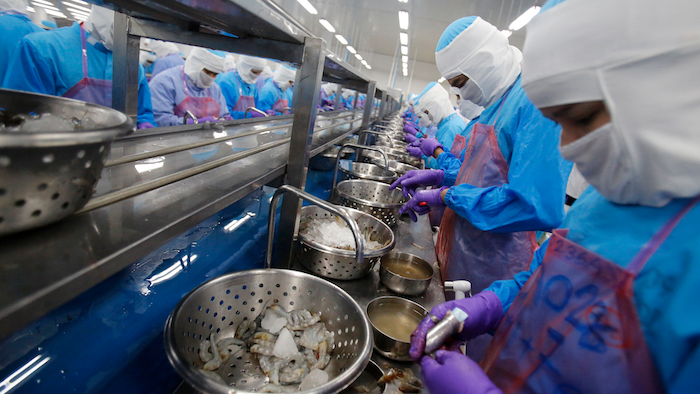 The report is a follow-up to one published in 2018, and compares the workers situations from earlier surveys to one conducted last year.

However, the industry began facing the threat of trade sanctions from Western nations after media exposure in 2014 of poor working conditions and especially the exploitation of 'fishing slaves' -- forced labor.

But the measures have failed to substantially cut the use of forced labor, it says. Extrapolating from the 2019 survey of workers, it estimates that 14% of those engaged in fishing and 7% of those in seafood processing were subject to some form of forced labor.

"These figures represent potentially tens of thousands of workers in the Thai fishing and seafood sectors," says the report. "These workers are overwhelmingly migrant men in fishing, and their numbers are greatest among the Cambodian fishers along Thailand's eastern seaboard ports."

"Nearly three-quarters of workers surveyed in 2019 – both fishing and seafood processing – reported that they found work or were recruited via their family and friends," it says.

The figures reflect a move away from registered agents and brokers, whose high fees put workers at risk of debt bondage, though there are still reports of wage withholding, deception and coercion.

Improvement was also noted in wages and how they are disbursed.

The report notes a shift from pay based only on a "share-of-the-catch" in fishing and from piece-rate work in the factories, saying 85% of workers in fishing and 26% in seafood factories are paid — or at least promised — a flat monthly pay rate.

The ILO and other advocates say a major stumbling block to further improvement has been the difficulty workers face in helping themselves, particularly because of a lack of labor unions in the sector.

The use of migrants workers from neighboring Myanmar and Cambodia is widespread, especially on fishing boats, but Thai law prohibits migrant workers from forming or leading unions.

Despite the prohibition and a generalized hostility to unions among Thai employers, 47 per cent of the surveyed workers indicated interest in joining unions or other labor-support organizations," it says.