Dutch Farmers Protest in The Hague Against Emissions Policy

Farmers believe they are being disproportionately targeted by lawmakers. 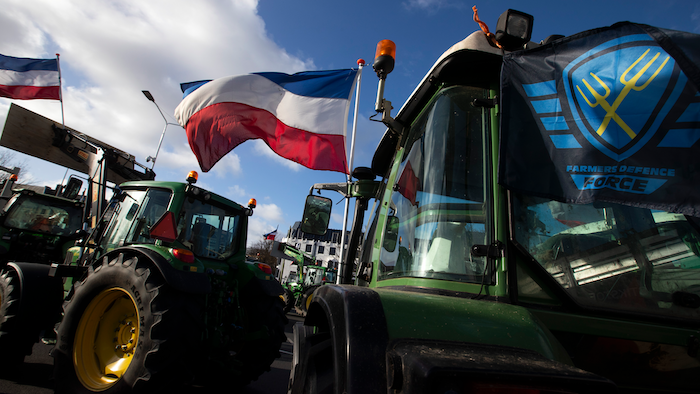 The Farmers Defense Force flag, right, and Dutch flags, fly in the wind on an intersection blocked by tractors in The Hague, Netherlands on Wednesday, Feb. 19. Dutch farmers, some driving tractors, poured into The Hague on Wednesday to protest government moves to rein in carbon and nitrogen emissions to better fight climate change.
AP Photo/Peter Dejong

THE HAGUE, Netherlands (AP) — Thousands of angry Dutch farmers converged on The Hague on Wednesday in the latest protest against the government's plans to rein in emissions of nitrogen oxide.

As tractors poured into the city, the Dutch military parked large trucks across strategic roads to prevent farmers from driving into the business and shopping center.

The demonstration comes a day before a debate in parliament on how to rein in emissions of the pollutant nitrogen oxide. Farmers believe they are being disproportionately targeted by lawmakers, saying that aviation, construction and other industries also are major polluters.

Sieta van Keimpema of Farmers Defence Force, which organized the protest, said politicians should listen to farmers, whose plans would reduce emissions while also protecting jobs in the lucrative agriculture sector.

“Our government sweeps farmers from the countryside and plants houses on the places where farmers' barns are demolished and memories of agriculture are erased,” Van Keimpema said.

Ype Reinsma, a farmer who traveled to the protest from the northern province of Friesland, said lawmakers should “give the sector a chance to use far more effective ways to reduce emissions of nitrogen oxide, which we’ve already been doing for years,” said .

“Why is everything aimed at the farmers?” he added.

Police issued tickets to a small number of farmers across the Netherlands for driving their tractors on highways and police in The Hague arrested a 33-year-old protester for ignoring their instructions and creating “a dangerous situation on the road.”Another man was detained at the end of the protest as police blocked roads to prevent a couple hundred demonstrators approaching the agriculture ministry.

In October, thousands of farmers, many driving tractors, descended on The Hague, causing traffic chaos across the country. Far fewer tractors appeared to take part in Wednesday's protest and traffic authorities said that it did not create major problems on the country's roads.

Among measures being considered by the government are a multi-million euro fund to buy out farmers who voluntarily want to close their farms and moves to encourage the modernization of farms.

“I hope that some ministers wake up and take action and not promise all sorts of things and then do nothing as happened last time. It can’t continue this way,” said another protester, Wim Westerneng.

Farmers argue that the government’s plans are based on inaccurate readings and calculations by the government-funded National Institute for Public Health and the Environment. New measurements are set to be released on Thursday.

The Dutch farming lobby is powerful because of the economic significance of agriculture to the economy. The Dutch farmers’ organization, LTO, says exports from the country’s nearly 54,000 farms and agriculture businesses were worth 90.3 billion euros ($98.3 billion) in 2018.