China is one of the biggest export destinations for lobster, which are worth hundreds of millions of dollars per year. 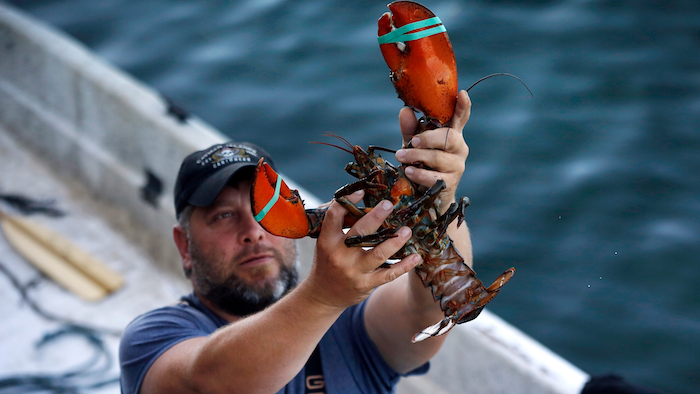 PORTLAND, Maine (AP) — Members of the American lobster industry are hopeful the thawing of trade relations between the U.S. and China will reopen one of the biggest markets in the world for the seafood.

China is one of the biggest export destinations for lobster, which are trapped in the cold waters of the Atlantic Ocean by American and Canadian fishermen and are worth hundreds of millions of dollars per year. But President Donald Trump's trade hostilities with China resulted in heavy tariffs on U.S. lobster exports, and Canada took firm control of the business over the last 18 months.

Trump and Chinese officials announced a new trade agreement Wednesday that could change all that. The proposal includes purchase agreements that formalize China's commitment to buy more American goods in some sectors, said Republican Sen. Susan Collins. Lobster is highlighted in the agricultural purchase agreement, the Maine senator added.

That clears a path for American lobster exporters to take back access to China, a market that had been growing for years, said Annie Tselikis, executive director of Maine Lobster Dealers’ Association.

“China presents incredible opportunity for the coastal Maine economy and regaining access to that market is essential for our long-term growth,” Tselikis said, adding that Maine is the biggest lobster state in the U.S.

American lobster exports to China cratered last year, dropping to less than $47 million through November. The exports were worth more than $138 million in 2018 through the same month. The collapse of the export market followed years of heavy growth spurred in part by the expanding Chinese middle class.

It remains to be seen just how much of the Chinese market American exporters can get back, said Stephanie Nadeau, owner of The Lobster Co., an Arundel, Maine, exporter. She said she has lost half her workforce due to the trade fight.

The U.S. lobster industry benefited from the growth of the Chinese market prior to the trade hostilities because fishermen are in the midst of a multi-year boom in lobster hauls. China emerged as a new trade partner in a time when lobstermen were catching more of the crustaceans than ever, and that served to help buoy prices for the seafood. Winter is an especially busy time of year for lobster exports to China because the seafood delicacy is especially popular on the Chinese New Year, which falls on Jan. 25 this year.

U.S. Trade Representative Robert Lighthizer said the new agreement “will provide lobstermen and womrn a more level playing field” and more stable access to China. But Mary Lovely, a senior fellow at the Peterson Institute for International Economics, said it remains to be seen just how much the new pact will benefit U.S. seafood.

“One thing we can say is right now it's a serious deescalation and it's possible we'll see some relief in seafood,” Lovely said. “And that's a good thing.”