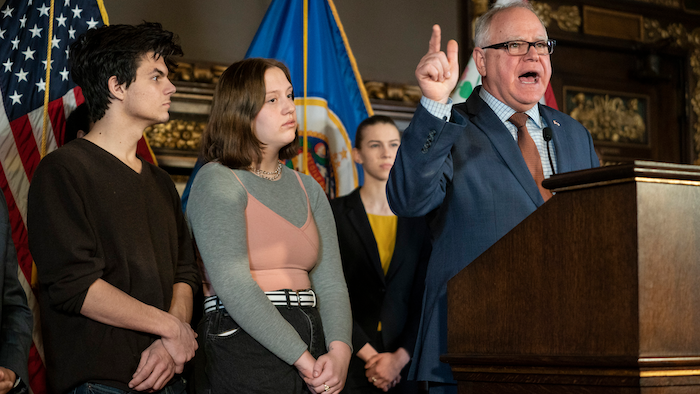 Minnesota Gov. Tim Walz speaks at a press conference at the State Capitol on Wednesday, Dec. 4, in St. Paul, MN. At his left were two teens, Will Gitler and Claire Hering, who spoke about being vaping addicts.
Renee Jones Schneider/Star Tribune via AP

The lawsuit filed in Hennepin County District Court in Minneapolis seeks to force Juul to stop marketing to young people; fund a corrective public education campaign in Minnesota on the dangers of youth vaping; fund vaping cessation programs; disclose all its research on vaping and health; and surrender all profits from its allegedly unlawful conduct.

“They have deceived and misled Minnesota consumers of all ages, creating a public nuisance, and especially harmed our young people," Ellison said at a news conference with Gov. Tim Walz. “Juul is by far the dominant e-cigarette manufacturer in America, and it's growing fast.”

Ellison declined to put a dollar figure on how much money the state will seek in damages and civil penalties. But he said it could be in line with the state's landmark $7 billion settlement with the tobacco industry in 1998. He said the San Francisco-based company followed “Big Tobacco's playbook” of marketing to young people.

Juul issued a statement saying it's “working cooperatively" with attorneys general, regulators and other stakeholders to prevent underage use of its products and to switch adult smokers away from conventional cigarettes. The company said it recently stopped accepting orders for mint-flavored pods in the U.S. and suspended all its broadcast, print and digital product advertising in the country.

“Our customer base is the world's 1 billion adult smokers and we do not intend to attract underage users," the statement said.

Juul Labs — which is facing a growing number of state and federal investigations into its marketing and sales — is about one-third owned by tobacco giant Altria, the maker of Marlboro and other popular brands.

The Minnesota lawsuit is separate from lawsuits filed by several other states in the last two weeks.

Ellison said Juul created a public nuisance and violated Minnesota's consumer protection laws by developing “products with higher, more potent and more addictive doses of nicotine than conventional cigarettes, and other e-cigarettes, then not only failed to disclose that to its customers, but represented that its products were safe alternatives to cigarettes."

Walz said Juul knew the harm when it deliberately targeted Minnesota's children “for simple greed and simple profit.” Using the money Minnesota received under the 1998 settlement, he said, the state brought youth tobacco use way down “until the scourge of vaping" came along.

The attorney general's office hired two outside law firms, Robins Kaplan and Zimmerman Reed, to represent the state. Robbins Kaplan also represented Minnesota in the epic litigation that led to the 1998 settlement, which forced the industry to turn over millions of pages of previously undisclosed documents on its practices.

Walz and Ellison warned that the new lawsuit could take years and draw an army of high-priced company lawyers, as the 1998 case did.

“And they will use their merchant of death playbook to tell us we're bad parents, to tell us we have bad kids, to tell us that we should have known," Walz said “... But my message to Juul if they're listening today is, you can hire your attorneys, you will have your day in court, but we will bring the righteous justice of the state of Minnesota down on Juul."

Effective Jan. 25, David Lee takes a top leadership role at the fast-growing AgTech startup that is building some of the country's largest indoor farms.
Jan 7th, 2021
Follow Us
Most Recent