America's Got Scallops: Catch is Up, Consumers Shelling Out

The scallop industry is thriving as a result of years of conservative management that has allowed the valuable shellfish to grow. 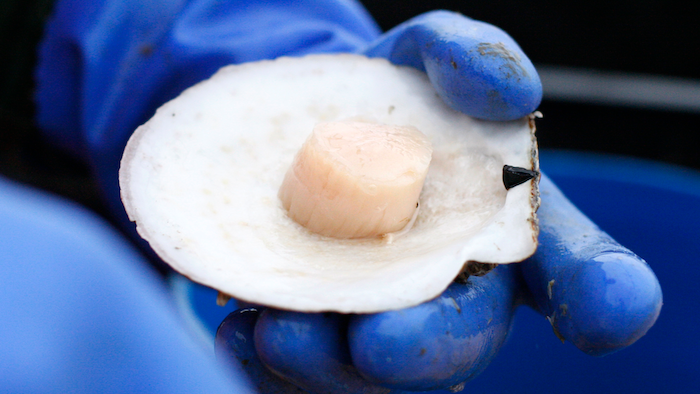 PORTLAND, Maine (AP) — America's harvest of scallops is increasing to near-record levels at a time when the shellfish are in high demand and the value of the fishery has surged in recent years.

Sea scallops, harvested mostly by boats from the cold Atlantic Ocean, are the target of one of the most valuable fisheries in America. New data from the National Oceanic and Atmospheric Administration says the harvest topped 58.2 million pounds last year, the highest total since 2011 and the fifth-highest in history according to federal statistics going back to 1945.

The availability of scallops for consumers hasn't changed much as the U.S. harvest has long been supplemented by foreign sources. Prices to consumers have also held about steady. The value of the fishery itself, though, is rising. American scallops were worth $532.9 million at the docks last year. That's the third-highest figure on record and more than $100 million higher than the 2014 total.

The scallop industry is thriving as a result of years of conservative management that has allowed the valuable shellfish to grow undisturbed, said Jimmy Wotton, a scalloper based out of Friendship, Maine.

"There's a lot of scallops out there, and we did really well in the northern Gulf of Maine," said Wotton, referring to a key fishing area off New England. "The market has been strong." The U.S. scallop fishery is anchored by New Bedford, Massachusetts, the state where by far the most scallops come to the docks. Other states with significant scallop fisheries are New Jersey, Virginia, Rhode Island, Connecticut and Maine. Maine scallops are beloved in part because some of them are harvested by hand by divers, though most are taken by boat.

The price U.S. fishermen receive for their scallops at the dock has fallen somewhat in the last couple of years, though they remain a premium product for consumers, who typically pay $18 to $22 per pound for them. The fishery is projecting to land even more pounds this year, said Andrew Minkiewicz, a Washington, D.C.,-based attorney who works with fishing advocacy group Fisheries Survival Fund.

"When you have a fishery that is constantly able to supply the product, you can sustain that demand," he said. Federal fishing managers are working on potential changes to the rules governing the scallop industry that could go into effect in 2021. Fishermen who operate small boats are hopeful for management that works for vessels of all sizes, said Ben Martens, executive director of the Maine Coast Fishermen's Association.

"The Gulf of Maine is a very delicate resource and you could very easily fish down that fishery of scallops very quickly," he said. "The hope is we can put some really good sustainable fisheries management in place to basically steward it going forward."