The move came less than a week after the head of the WFP accused the rebels of diverting food aid. 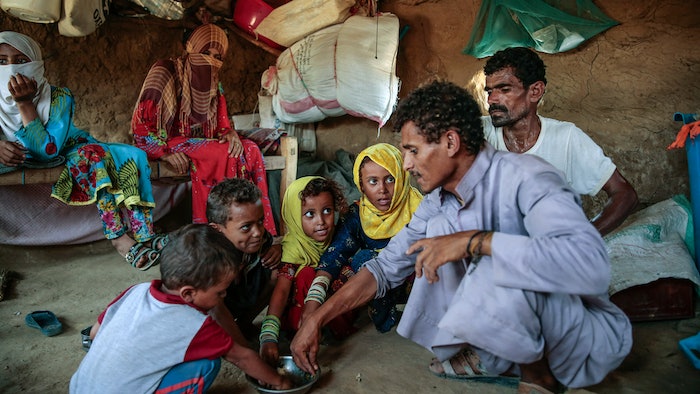 CAIRO (AP) — The U.N. food agency has begun a partial suspension of food aid to areas of Yemen controlled by the rebels amid accusations they were diverting aid from the war-torn country's hungriest people, the group said Thursday. The World Food Program said it suspended its operations in the capital, Sanaa, which has been under Houthi control since 2014. The suspension would affect 850,000 people, it said in a statement.

The move came less than a week after the head of the WFP accused the rebels, known as Houthis, of diverting food aid. The Houthis denied the accusation. "The decision was taken as a last resort after lengthy negotiations stalled on an agreement to introduce controls to prevent the diversion of food away from some of the most vulnerable people in Yemen," the agency said.

The WFP said it failed to reach an agreement with the Houthis on introducing "a biometric registration system that would prevent diversion and protect the Yemeni families we serve, ensuring food reaches those who need it most." The agency said it has repeatedly appealed to the rebels for "space and freedom to operate ... impartiality" and with operational independence.

WFP said it would maintain nutrition programs for malnourished children, and pregnant and nursing mothers throughout the period of suspension.

On Monday, David Beasley, executive director of the World Food Program, told the U.N. Security Council that his agency has insisted on — and the Houthis finally agreed to — registration and biometric identification of beneficiaries and monitoring in December and January, but the WFP has faced roadblocks ever since in implementing the agreements.

"If we do not receive these assurances, then we will begin a phased suspension of food assistance, most likely toward the end of this week," he said. The Associated Press reported December 31 that armed factions on both sides of the conflict were stealing much-needed food aid, diverting it to their fighters or reselling it for profit. Some groups are blocking deliveries to communities they view as their enemies, the AP found. WFP confirmed the report.

On January 1, the Houthis said they were "surprised" by the WFP's accusations and accused the food agency of taking sides in the war. Beasley told the council Monday that the diversions were mainly in Houthi areas. When there are reports in government-controlled areas, he said, "we receive cooperation to address issues."

Mohammed Ali al-Houthi, a rebel leader, has accused the WFP of sending expired food to Yemen. He demanded the agency distribute cash rather than their "corrupted food," according to the Houthi-run al-Masirah TV. The conflict began with the 2014 takeover over of northern and central Yemen by the Iranian-backed rebels, driving out the internationally recognized government from the capital, Sanaa.

Months later, in March 2015, a Saudi-led coalition launched its air campaign to prevent the rebels, known as Houthis, from overrunning the country's south. In the campaign, Saudi-led airstrikes have hit schools, hospitals and wedding parties and killed thousands of Yemeni civilians. The Houthis have used drones and missiles to attack Saudi Arabia and have targeted vessels in the Red Sea.

Civilians have borne the brunt of the conflict, which has created what the United Nations says is the world's worst humanitarian crisis. The war killed at least 91,600 people since 2015, according to the Armed Conflict Location & Event Data Project, or ACLED, which track the violence.