The first 10-ounce frosted mug of root beer sold for a nickel. A&W is also credited with being the first to offer a historic addition to the cheeseburger. 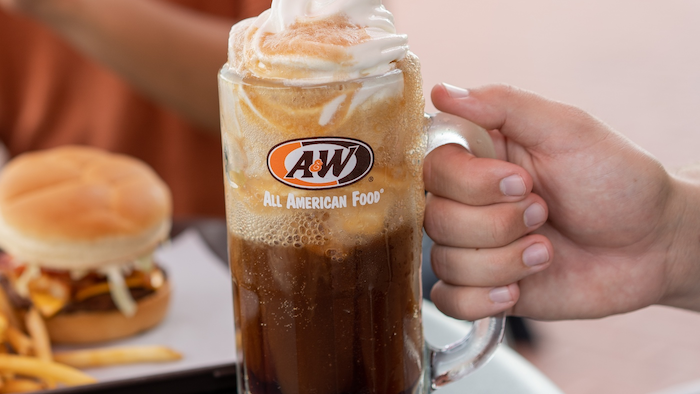 A&W Restaurants, which made root beer a household beverage and invented the bacon cheeseburger, turns 100 on June 20. California entrepreneur Roy Allen served the first frosty mug of A&W at a stand during a parade honoring World War I veterans in the small Northern California town of Lodi. His secret recipe of herbs, bark, spices and berries was an instant hit. A 10-ounce frosted mug sold for a nickel.

A&W grew rapidly in the years following World War II, with many returning soldiers using GI Bill loans to open franchises. The chain is credited with creating the drive-in restaurant phenomenon of the 1950s and 60s. Its Modesto, California, restaurant was the inspiration for the classic film American Graffiti.

“There’s a lot of history in 100 years, but our longtime connection to veterans is a common thread,” said CEO Kevin Bazner. “That’s why we are especially pleased to again be supporting Disabled American Veterans – DAV – as part of our celebration.” To commemorate its centennial, A&W created a book of memories and photos fans and former employees submitted. Sales benefit DAV. Buy it online in the A&W Merchandise Store. This week A&W also kicks off its annual summer fundraising campaign for DAV, which culminates on National Root Beer Float Day, August 6.

Bazner noted that A&W has survived recessions, wars, the Great Depression, sugar shortages, competition and 11 ownership changes. “Today, A&W is the strongest it has been in decades, in part because we have returned to our roots, literally – serving freshly made Root Beer in frosted mugs along with all-American food favorites.”

Today, there are about 1,000 restaurants around the world, with almost 600 in the U.S. A&W is owned by its franchisees, who acquired it from YUM! Brands in 2011. Forty-five new A&Ws are scheduled to open this year.