Almost six percent of the food sold in the U.S. is now organic. 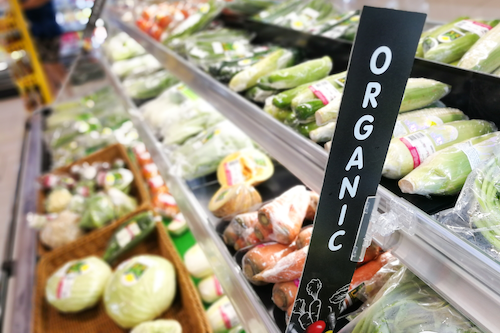 The U.S. organic market broke through the $50 billion mark for the first time in 2018, with sales hitting a record $52.5 billion, up 6.3 percent from the previous year. This is according to the 2019 Organic Industry Survey released Friday by the Organic Trade Association.

Millennials are pushing for transparency in the food supply chain. The USDA Organic seal is gaining new appeal as consumers realize that organic is a certification that is not only monitored and supported by official standards, but is the only seal that encompasses the spectrum of Non-GMO, no toxic pesticides or chemicals, dyes or preservatives.

Almost six percent (5.7 percent) of the food sold in this country is now organic, and available in big box stores, club warehouse stores, neighborhood convenience stores, and increasingly on the internet. Organic is no longer a niche market.

“Organic is now considered mainstream. But the attitudes surrounding organic are anything but status quo,” said Laura Batcha, CEO and Executive Director of the Organic Trade Association.

Still the stalwart of the organic industry, sales of organic fruits and vegetables rose to $17.4 billion in 2018 for  a 5.6 percent rate of growth, on par with the growth attained in 2017. By comparison, the overall fruits and vegetables category, including both organic and conventional products, grew by1.7 percent in 2018.

Fruits and vegetables now account for 36.3 percent of all organic food sales. Organic fruits and vegetable make up close to 15 percent (14.6 percent) of all the produce sold in the U.S., and have nearly doubled their market share in the last ten years. Produce is a gateway to organic for consumers, especially Millennials and those with young families. Industry experts note that the more people learn about health and wellness, the more people buy fresh produce.

Innovation is Key in the Organic Dairy Market

Shoppers, especially young families, are increasingly seeking out brands committed to sustainable agriculture. Those shoppers turn to organic dairy as a product free of antibiotics, synthetic hormones and chemicals. But growth in the U.S. dairy sector slowed for the second straight year due largely to shifting diet trends. Still the second-largest organic category, dairy and egg sales were $6.5 billion in 2018, up 0.8 percent from 2017.

Although growth in organic egg sales has slowed from the strong double-digit growth seen in the first part of this decade, the $858 million category still grew by a solid 9.3 percent in 2018. As more consumers get into organic, organic egg demand is expected to continue growing.

But where skim milk and low fat products were not so long ago favored by consumers, products high in healthy fats and protein are now popular. Many Millennials have also moved away from livestock-based products toward plant-based foods and beverages. Experts said that to satisfy today’s consumer, the importance of innovation in the organic dairy sector has never been greater. In 2018, the industry responded with milk beverages with increased protein, more full-fat dairy products, new flavors and grass-fed products.

The outlook for organic is not without its challenges, but all expectations are that innovation and activism by the organic industry will continue to build as the sector works to maintain the credibility of the Organic seal and the trust of consumers.

“Organic is in a unique and tough environment. The government is slowing the advancement of the organic standard, but the positive news is that industry is finding ways to innovate and get closer to the consumer without walking away from the organic program—the sector is innovating yet requiring that federal organic be in place,” said Batcha.