The company is creating smaller teams to speed product development. 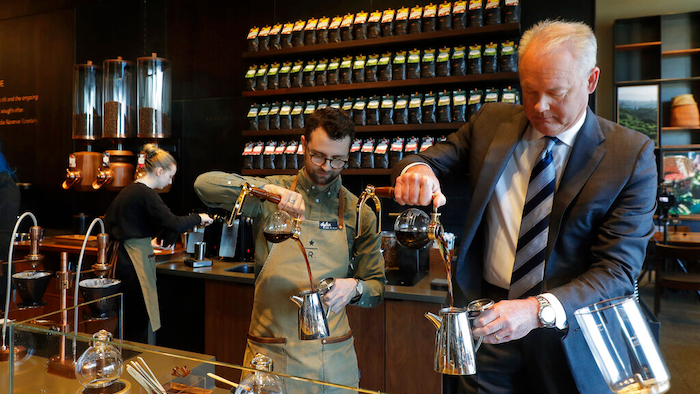 In China, Starbucks is opening a store every 15 hours as it tries to stay ahead of cheaper competitors.

Those moves may help Starbucks improve store traffic, which was down worldwide in the most recent fiscal year. But other pitfalls remain. For example, the Seattle-based chain could face significant backlash if its former Chairman and CEO Howard Schultz decides to run for president.

Johnson, a former technology executive, joined Starbucks Corp.'s board in 2009 and became CEO in 2017. He recently discussed the company with The Associated Press. Questions and answers have been edited for length and clarity.

Q. New drinks bring customers in, but how do you balance that with satisfying customers who want familiar drinks?

A. We serve over 100 million customers a week in 30,000 stores around the world. Many times customers come in because they have their favorite beverage, and so we've oriented our beverages around our core platforms, whether it's brewed coffee or espresso, Teavana or our Refreshers. And then we'll take a core beverage platform like macchiato and we'll do a little twist or something a little special.

Q. Howard Schultz's announcement puts Starbucks in a tough spot. How can you support the company's longtime leader but also distance yourself?

A. He's no longer the CEO or the executive chairman. He's independent in his own views and what he's doing. Our focus is staying on the business of Starbucks. We don't get involved in national political elections.

Q. One of your most visible actions as CEO was your decision to close all U.S. stores for a day last spring for racial bias training after two black men were arrested at a Starbucks in Philadelphia. Has that action led to lasting change?

A. Closing all of our stores and putting together all of the anti-bias training was the beginning of a journey. Since then we've added to that with what we call pour-over sessions and other training that we do every month across the company. I would say that this will always be a journey for us. The actions that we took and the actions we continue to take are making us a better company.

Q. You spent 32 years in the tech sector before assuming your current role. How has your background in technology informed your work at Starbucks?

A. I learned about how to how to unify people around a common mission and pursue that particular mission. In addition to that, I spent years understanding how technology is reshaping the consumer. Starbucks has over 16 million active Rewards members and a total of 30 million digitally connected customers. We're bringing in technology in a way that complements the human connection and the in-store experience. And that is a big part of what we believe is essential for every retailer.

Q. Starbucks recently launched delivery in the U.S. through UberEats. But it has always commanded a premium because it has well-designed stores and hand-crafted drinks. How does that change if more customers start using delivery?

A. One of the design criteria we had when we introduced Starbucks Delivers was to make sure that opening up the delivery channel does not negatively impact the experience in our stores. We've had the processes tuned in a way that we have seamless interface from the UberEats technology into our in-store technology. And we use the processes that we use for mobile ordering to figure out how we can meet demand without impacting those customers who are ordering in our stores. So thus far we've had a very good rollout. This phenomenon of delivery is taking place around the world, and so this this concept of ordering Starbucks for delivery is one that will start to shape itself globally as we go forward.

Q. What advice would you give to your younger self?

A. Well, if I think back in my life journey the advice I would give the younger version of myself is be authentic. I went through life maybe not having the courage to show vulnerability or the confidence to really be who I was and as I got later in my life I figured out that authenticity is the fastest way to create human connection and to lead people. That means having the courage to show vulnerability, show empathy and compassion and in doing that, you're demonstrating something that every single one of us on this planet has in common. That is the human experience and that is what makes great leaders.