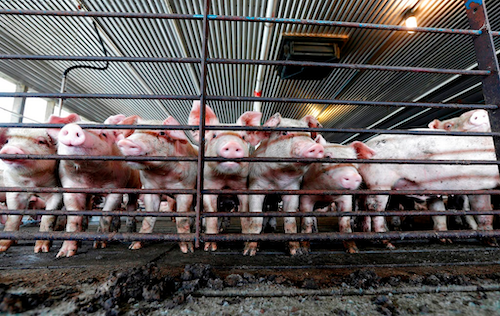 Most of the damages awarded were intended to punish Smithfield Foods for its actions, but a state law limiting the size of punitive awards means they are automatically capped.

Friday's verdict was the second time a jury heard about intense smells, clouds of flies and other conditions around the same Duplin County operation that raised about 5,000 of the company's animals.

For this five-week trial, plaintiffs' lawyers hand-picked the 10 neighbors, who have lived on their Duplin County land for decades. Company lawyers previously picked two other neighbors of Joey Carter's farm. In July, jurors awarded them $25 million in damages.

A federal judge has the two sides alternating who picks cases for juries to consider, anticipating it could lead to a negotiated settlement that could resolve dozens of lawsuits and the claims of more than 500 neighbors.

Agricultural interests and sympathetic politicians have warned the lawsuits threaten all farmers if whopping penalties can be slapped on operations that are regulated and annually inspected as North Carolina hog operations are.

"We believe that this verdict is unfair and unjust. It presents an unwarranted threat to North Carolina farm families and to all agriculture across the country," company spokeswoman Keira Lombardo wrote in an email Friday.

Carter, a former police chief in the nearby town of Beulaville, was not sued. Smithfield Foods was held responsible because the company's hog-raising division uses strict contracts to dictate how farm operators raise livestock that Smithfield owns.

But Carter hasn't had a revenue-producing hog on his farm since October and Smithfield quit sending new animals there since May, Lombardo said in an email this week. She did not respond when asked whether Smithfield removed its animals because Carter was deemed to be breaching his contract. The company wrote in May to another farm operator, William Kinlaw, after Smithfield lost a related lawsuit that he breeched his contract with the pork giant by failing to control odors and "maintain proper sanitation."

For both operations, Smithfield is paying the hog operations — in amounts the company didn't specify — while it appeals the cases, Lombardo said. The payments to Carter are "an attempt to offset the adverse impact these lawsuits have on family farmers like him and on communities like Beulaville," Lombardo wrote.

Environmental advocates have cheered the big penalties as finally forcing pork producers to acknowledge long-standing complaints from neighbors and claims that animal waste has polluted waterways.

The predominant method of handling hog waste in North Carolina is collecting it in open-air pits that are then emptied by spraying treated liquid excrement on farm fields. The method was banned at new livestock operations in 1997, when industrial-scale hog operations began to be planned near the Pinehurst golf resort two years before it would host the U.S. Open tournament.

Smithfield has continued using the low-cost method because it helps the company produce pork for less than in China, lawyers for the neighbors said. Smithfield is owned by Hong Kong-headquartered WH Group.