It is putting more nitrogen from animal waste into waterways than any other slaughterhouse in the U.S. 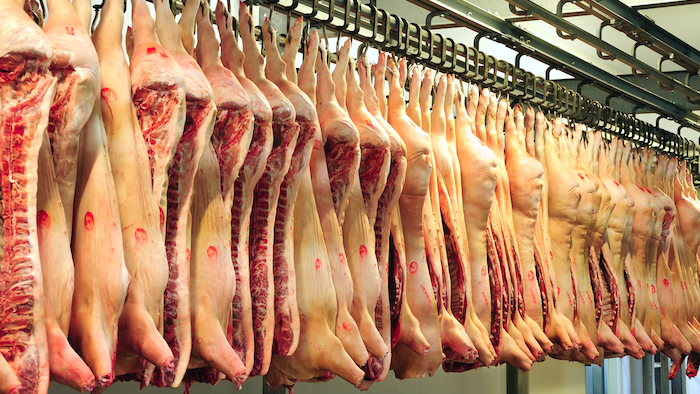 BEARDSTOWN, Ill. (AP) — A central Illinois pork-processing plant released more nitrogen from animal waste into waterways than any other slaughterhouse in the U.S., according to a report from a nonprofit environmental organization.

The report found meat-processing giant JBS's Beardstown plant released about an average of 1,850 pounds of nitrogen daily into an Illinois River tributary. The discharges are within limits placed by the Clean Water Act.

JBS officials said the report's findings are inconsistent with internal figures. The company said it's inaccurate to imply that the plant makes discharges daily when it only discharged 295 days last year.

"The JBS Beardstown pork facility is well within its permitting requirements and has achieved improved environmental compliance since our acquisition of the facility in late October 2015," the company said in a statement. "The facility has not experienced a water noncompliance issue since December 2015."

The Beardstown complex, which is about 240 miles southwest of Chicago, produces more than 1 billion pounds of pork annually.

"Butchering so many animals under one roof is inherently messy — that's no surprise — and that makes them very, very large sources of water pollution," said Eric Schaeffer, director of Environmental Integrity Project. "Those pollutants include nitrogen, which is a chronic water pollutant across the U.S., especially in rural areas."

The wastewater typically goes through a treatment facility, but residual nutrients such as nitrogen can stimulate algae blooms that deplete oxygen levels as they decompose. This can suffocate fish and create dead zones.

Schaeffer said the report's findings indicate a need to revisit the limits on slaughterhouse waste, which were last modified in 2004.

"If you've got a generous limit that gives you a lot of headroom and lets you pollute more, you're less likely to violate it," Schaeffer said. "What we're seeing is that permit limits are too relaxed."