They not only devour huge juvenile populations of grouper, snapper and shrimp, but females can lay as many as 30,000 eggs a week. 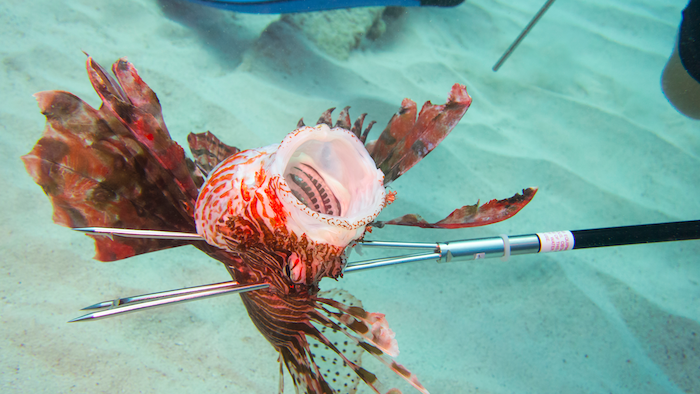 More than two decades ago the waters off of Florida’s Atlantic Coast were introduced to an invasive species called the Lionfish. Native to the Indo-Pacific region, their presence probably stemmed from aquarium owners dumping their tanks.

Equipped with venomous dorsal fins, they not only devour huge juvenile populations of grouper, snapper and shrimp, but females can lay as many as 30,000 eggs a week. This potent combination has allowed the lionfish to infest waters from Florida to the Carribean and negatively impact fishing all along the way.

In response, students at Worcester Polytechnic Institute in Massachusetts have designed an autonomous underwater robot for hunting the fish. The unit has an artificial intelligence-driven computer vision platform that uses a neural software network tied to a database with thousands of images of lionfish other marine inhabitants so it knows what to shoot.

Once a lionfish is detected, a chamber that works similar to a revolver rotates and fires a metal spear that floats. So once it connects with the target, the spears are buoyant enough to float the tip and the lionfish to the surface for collection.

This last part is extremely important. Because although it’s a tremendous pest, lionfish are also sought after by restaurants, with market price fetching upwards of $20/lb. The autonomous nature of the robot and floating tips allow for accessing deeper areas than usual for spear fisherman, which are also the more popular hiding spots for Lionfish.

Initial testing has only taken place in a pool, but ocean experiments are projected for 2019.