Report: E-Cigs No Better Than Other Quit-Smoking Tools

The FDA is mulling how to regulate them, and earlier this year, experts said vaping may help folks reduce smoking but that more research is needed. 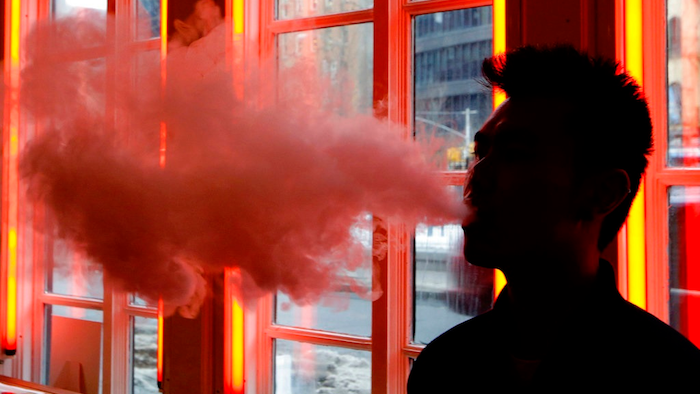 It's a big question for smokers and policymakers alike: Do electronic cigarettes help people quit? In a large study of company wellness programs, e-cigarettes worked no better than traditional stop-smoking tools, and the only thing that really helped was paying folks to kick the habit.

Critics of the study say it doesn't close the case on these popular vaping products. It didn't rigorously test effectiveness, just compared e-cigarettes to other methods among 6,000 smokers who were offered help to quit. That's still valuable information because it's what happens in daily life.

Providing e-cigarettes "did not improve the number of people who quit compared to essentially doing nothing," said Dr. Scott Halpern of the University of Pennsylvania. "The very best way to help them quit is to offer them money."

He led the study, published Wednesday by the New England Journal of Medicine. It was sponsored by the Vitality Group, which runs company wellness programs. The makers of NJOY e-cigarettes provided them but had no role in the research.

Separately in the journal, another study reports that lung cancer rates are now higher for white and Hispanic women under 50 than for men that age, a reversal of a longtime trend that can't be explained by smoking patterns alone.

E-cigarettes are battery-powered devices that vaporize nicotine. They've been sold in the U.S. since 2007 and contain less toxic substances than traditional cigarettes. The Food and Drug Administration is mulling how to regulate them, and earlier this year, a national panel of experts said vaping may help folks reduce smoking but that more research is needed.

The new study differed from usual studies of smokers wanting to quit: It automatically enrolled smokers in 54 company wellness programs and asked those who didn't want to join to opt out. Only 125 did, but the vast majority of the rest didn't actively participate yet their results were tracked as part of the study.

They were put into five groups: usual care, which was information on benefits of quitting and motivational text messages; free quit-smoking aids such as nicotine patches and medicines like Chantix or Zyban plus e-cigarettes if those failed; free e-cigarettes without any requirement to try other methods first; free quit-smoking aids and a $600 reward if people were abstinent six months later; and free cessation tools plus $600 placed in an account at the start of the study that they'd lose if they didn't quit.

The results: Only 0.1 percent in the usual care group succeeded; rates ranged from 0.5 percent to nearly 3 percent for the rest. The groups offered cash did best; rates among the other groups did not differ much from each other.

Success rates were higher — from 0.7 percent to nearly 13 percent — among 1,200 smokers who actively participated.

Average costs were less than a dollar per participant in the usual care group and around $100 for those given redeemable cash accounts. But when looked at per successful quitter, the cash programs cost less than e-cigarettes or traditional methods.

Most big companies offer stop-smoking programs and half of them offer financial incentives, study leaders said. It costs companies $3,000 to 6,000 more per year to employ a smoker versus a non-smoker.

"E-cigarettes are substantially less harmful than burned or lit cigarettes, but that doesn't mean they're helpful for cessation" and they're not regulated for that, said Cliff Douglas, the American Cancer Society's tobacco policy expert.

Gregory Conley, who heads the American Vaping Association, said the type used in this study is obsolete, and all of the methods proved "pathetic" because smokers were automatically enrolled and may not have wanted to quit. "You're just thrusting the product on people," he said.

Dr. Nancy Rigotti, director of the tobacco research and treatment center at Massachusetts General Hospital who was on the expert panel, said it was a well-done study that gives "a little discouraging and surprising" results. The value of traditional methods is well established, so counseling and support might have been inadequate in this study, she said.

Others were critical of the study's methods. David Abrams, a former tobacco researcher at the National Institutes of Health and now at New York University, said researchers don't know how many in each group actually used the quit-smoking tools.

"You can't conclude that the treatments didn't work if nobody used them," said Abrams, who called e-cigarettes "the best thing that's come along in 10 years to help people quit."

A smoker took a different view.

"For me personally, it was useless," said Georges Touaichi, a 22-year-old San Diego hotel worker who tried e-cigarettes but went back to smoking after a day or two.

An FDA spokesman said the agency was pondering the results, but that this is not the type of study needed to evaluate safety and effectiveness of e-cigarettes for smoking cessation.

For the other study in the journal, researchers used U.S. cancer registries and federal health statistics to track new lung cancer cases by gender and race over various time periods. Rates historically have been higher in men but that trend reversed among whites and Hispanics born since the mid-1960s.

For example, among people ages 45 to 49 and diagnosed from 1995 to 1999, rates in women were 26 percent lower than for men. But in a more recent time period, 2010 to 2014, women had an 8 percent higher incidence rate than men, said one study leader, the American Cancer Society's Ahmedin Jemal.

Women are catching up to men in smoking rates — 14 percent smoke versus 17 percent of men — but that's not enough to explain the switch, he said. Women also smoke fewer cigarettes than men.

One theory is that certain types of lung cancer are more common in women and the risk of them declines more slowly after someone quits, and women have lagged behind men in cessation rates, said Caitlin Murphy of the Simmons Cancer Center at UT Southwestern in Dallas.

"Maybe women are getting diagnosed more often through CT screening," which also would boost their rates compared to men, said Murphy, who had no role in the work.

For smokers who are 50, "if they quit now they can gain about six years of life," Jemal said. "They have this opportunity to avoid not only lung cancer but also other causes of smoking-related deaths."