Nestle and rival Cadbury have been tussling in court for years over various trademarks. 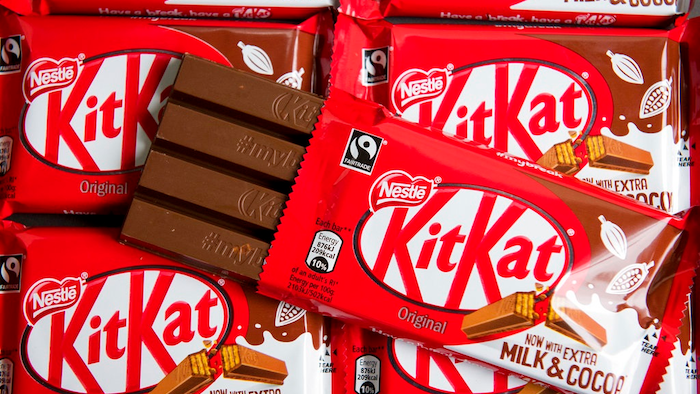 LONDON (AP) — Food giant Nestle on Wednesday lost a bid to trademark the distinctive four-fingered shape of the KitKat chocolate bar in Britain, the latest round in a courtroom battle with rival candy-maker Cadbury.

The Court of Appeal said there is insufficient evidence that consumers rely on the shape to identify the milk chocolate-coated wafer bar.

David Kitchin, one of the three judges, wrote that it was not enough that "consumers merely recognize it and associate it with the applicant's goods."

The Swiss food company first tried to register the trademark in 2010, but the application was opposed by Cadbury.

Nestle said it was disappointed with Wednesday's ruling and was "considering next steps," which could include an appeal to the Supreme Court.

It said KitKat's shape has been granted trademark protection in countries including Germany, France, Australia, South Africa and Canada.

It's not the first time Cadbury and Nestle have tussled over confectionery in a British court. In 2013, Nestle won a battle over Cadbury's attempt to register the purple shade of Dairy Milk chocolate wrappers as a trademark.

"Businesses seeking to protect non-traditional trademarks such as shapes or packaging will need to provide evidence that consumers are relying on that trade mark to identify the origin of the product," Britton said.