Homeowners say the growing number of oystermen — dressed in waders and often tending cages of shellfish — spoil their views and invade their privacy. 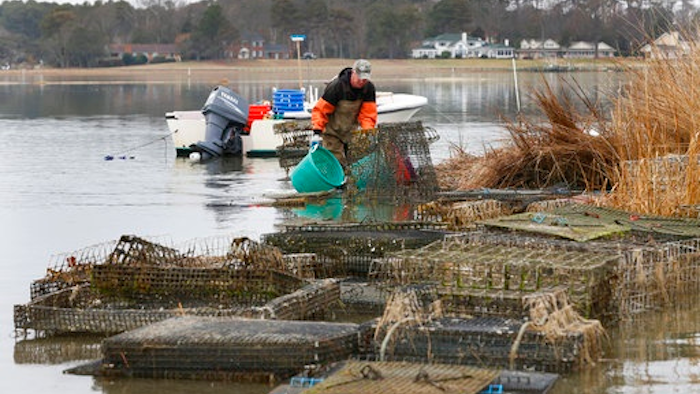 VIRGINIA BEACH, Va. (AP) — Oystermen, pirates and police clashed violently more than a century ago over who could collect the Chesapeake Bay's tasty and lucrative oysters. As the shellfish makes a comeback, a modern-day oyster war is brewing, this time between wealthy waterfront property owners and working-class fishermen.

Over the past five years, oyster production has doubled on the East Coast, driven by new farming methods, cleaner water and Americans' growing taste for orders on the half shell. The resurgence has led to unprecedented resistance from coastal Virginians who want to maintain picturesque views from their waterfront homes and has fueled a debate over access to public waterways.

"These people can't have it all," said Chris Ludford, an oysterman in Virginia Beach who sells to nearby farm-to-table restaurants.

Ludford said he faces fierce pushback along a Chesapeake Bay tributary from people with "a $2,000 painting in their house of some old bearded oysterman tonging oysters.

"But they don't want to look out their window and see the real thing," he said.

Homeowners say the growing number of oystermen — dressed in waders and often tending cages of shellfish — spoil their views and invade their privacy. Residents also worry about less access to the water and the safety of boaters and swimmers.

Low tides often expose oyster cages, usually accompanied by markers or warning signs that protrude from the surface. In some places, cages float.

"All of sudden you have people working in your backyard like it was some industrial area," said John Korte, a retired NASA aerospace engineer in Virginia Beach who's among residents concerned about oyster farming's proliferation. "They may be a hundred feet away from someone's yard."

Ben Stagg, chief engineer at the Virginia Marine Resources Commission, said the state is poised to break its record of leased acreage for oyster growing. But nearly 30 percent of more than 400 new lease applications face opposition, an unprecedented number that has led to a backlog of leases awaiting approval.

"Occasionally I can resolve those by having the parties get together and adjust the area further offshore," Stagg said. "But oftentimes, I can't."

There hasn't been this much interest in oysters in Virginia since the early 1960s. Since then, disease and overfishing took hold and growers started to disappear.

Farming techniques also changed. Traditionally, oysters are grown on the bottom of a calm and salty river or bay, then harvested with tongs or dredges that pull them onto boats.

Now, fishermen are increasingly using cages to grow oysters over a two-to-three year period. The equipment keeps predators away and produces oysters with a more uniform shape and size, which restaurants prefer.

But the cages are often placed in shallower water closer to shore — and people's homes.

Virginia Beach is perhaps ground zero for today's oyster war. The state's largest city sits at the mouth of the Chesapeake Bay. And oysters thrive in the city's Lynnhaven River, a network of bays and creeks flowing past expensive homes. Lynnhaven oysters are well-known for their salty taste and size.

A state task force was formed to find compromise. It recommended giving residents more power to block nearby oyster leases. But the idea was rejected by the Virginia Marine Resources Commission, with the majority of commissioners saying state lawmakers should step in.

Proposals in the Statehouse have included raising the cost of an oyster farming lease from $1.50 an acre annually to $5,000. But legislators haven't found a solution.

Conflicts also have flared up along Maryland's Patuxent River, the coastal lagoons of Rhode Island and on Martha's Vineyard in Massachusetts.

In Delaware, a group of people who mostly own vacation homes successfully blocked potential oyster farming along their part of an inland bay.

"Oftentimes, affluent and new members of the community have the point of view that they own the water in front of them, which is really not true," said Bob Rheault, executive director of the East Coast Shellfish Growers Association. "We need to win back our social license to farm."

Rheault said he's seen these battles "up and down the East Coast" — even before the crop began to double five years ago.

"The industry was there before the waterfront mansions were built," Rheault added. "But it hasn't been there for this generation."

Ludford, who also works as a Virginia Beach firefighter, is relatively new to the business. He and other relatives started growing oysters in 2010 after leaving the crab industry.

On a recent morning, Ludford sorted through cages as he stood in the Lynnhaven River, hundreds of yards from the nearest home.

He dragged cages into view as grass shrimp wriggled on the shells. He and two helpers retrieved more than 500 oysters, which he sold at 75 cents apiece to three restaurants — totaling about $375.

"Really, people haven't seen an oysterman behind their houses in 50 to 60 years," Ludford said.

Steven Corneliussen, who owns a waterfront home in Poquoson, Virginia, said he's among a group that successfully protested new leases along his corner of the Chesapeake. He said waterways should be subject to zoning, like land.

Management of enterprise risk, recalls and traceability differentiates food and beverage manufacturers in crowded market verticals that operate on razor-thin margins. We cover it all in our new e-book, helping to put you on the right track.
Jul 1st, 2021