President Donald Trump's hard line against immigrants in the U.S. illegally has sent a chill through the nation's agricultural industry. 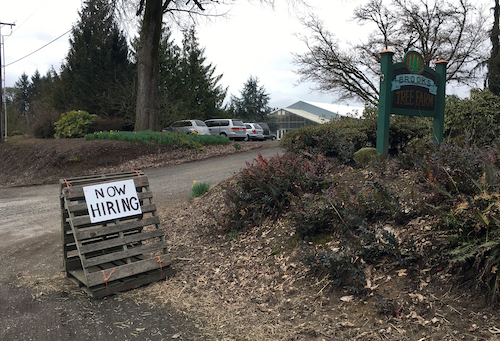 SALEM, Ore. (AP) — The head of Bethel Heights Vineyard looked out over the 100 acres of vines her crew of 20 Mexicans had just finished pruning, worried about what will happen if the Trump administration presses ahead with its crackdown on immigrants.

From tending the plants to harvesting the grapes, it takes skill and a strong work ethic to produce the winery's pinot noir and chardonnay, and native-born Americans just aren't willing to work that hard, Patricia Dudley said as a cold rain drenched the vineyard in the hills of Oregon.

"Who's going to come out here and do this work when they deport them all?" she asked.

President Donald Trump's hard line against immigrants in the U.S. illegally has sent a chill through the nation's agricultural industry, which fears a crackdown will deprive it of the labor it needs to plant, grow and pick the crops that feed the country.

Fruit and vegetable growers, dairy and cattle farmers and owners of plant nurseries and vineyards have begun lobbying politicians at home and in Washington to get them to deal with immigration in a way that minimizes the harm to their livelihoods.

Some of the farm leaders are Republicans who voted for Trump and are torn, wanting border security but also mercy toward laborers who are not dangerous criminals.

Farming uses a higher percentage of illegal labor than any other U.S. industry, according to a Pew Research Center study.

Immigrants working illegally in this country accounted for about 46 percent of America's roughly 800,000 crop farmworkers in recent years, according to an Associated Press analysis of data from the U.S. Departments of Labor and Agriculture.

The American Farm Bureau Federation says strict immigration enforcement would raise food prices 5 to 6 percent because of a drop in supply and because of the higher labor costs farmers could face.

In addition to proposing a wall at the Mexican border, Trump wants to hire 10,000 more Immigration and Customs Enforcement officers and has served notice that he intends to be more aggressive than the Obama administration in deporting immigrants.

ICE agents have arrested hundreds of immigrants since Trump took office, though how much of a change from the Obama administration that represents is a matter of debate.

Field hands have been among those targeted, with apple pickers detained in upstate New York and Guatemalans pulled over in Oregon on their way to a forest to pick a plant used in floral arrangements.

It doesn't appear the arrests themselves have put a sizable dent in the agricultural workforce yet, but the fear is taking its toll.

Some workers in Oregon are leaving for job sites as early as 1 a.m. and staying away from check-cashing shops on payday to avoid dragnets. Farm employers are worried about losing their workforces.

"They say, 'Don't go out, don't get drunk, don't do nothing illegal' because they need us too. They worry too," said Moses Maldonado, who is in the U.S. illegally and has worked for nearly four decades tending wine grapes and picking fruit in Oregon.

In Los Banos, California, asparagus farmer Joe Del Bosque said workers are so afraid of being arrested in the field that he struggled to find enough hands in March to pick his crop.

When immigration attorney Sarah Loftin held a recent seminar in the Oregon wine-region town of Newberg to talk about immigrants' legal rights, she was surprised to see about half of those present were winery owners or farmers.

By law, job seekers must provide documents establishing their eligibility to work in the U.S. But the papers are often fake. Many agricultural employers say that it's not their responsibility — and that they lack the expertise — to determine if they're genuine.

At the same time, they say that U.S.-born workers have little interest at laboring in the dirt and the cold at the crack of dawn.

As 18 Guatemalans in hoodies and rubber boots toiled in such conditions recently in Oregon's Willamette Valley, their boss expressed admiration for their willingness to do the back-breaking work he said native-born Americans won't do.

"Homeless people are camped in the fir forest over there," the farmer said, pointing to a stand of trees. "And they're not looking for work."

He lamented that crackdowns may force him to retire because he won't be able to find workers. Fearing reprisals from federal agents, he spoke on condition of anonymity and didn't want even his crop identified.

Some immigration hardliners say people who are in the U.S. illegally steal jobs from Americans. But a 2013 study by an economist at the Center for Global Development looked at farms in North Carolina and found that immigrant manual laborers had "almost zero" effect on the job prospects of native-born U.S. workers.

"It appears that almost all U.S. workers prefer almost any labor-market outcome — including long periods of unemployment — to carrying out manual harvest and planting labor," Michael Clemens wrote.

While lobbying for visa and immigration reforms, agricultural employers are also looking into contingency plans such as mechanization or a switch to less labor-intensive crops. In Vermont, officials are considering a vocational program to train inmates in dairy farming.

Dudley, the vineyard owner, isn't optimistic about some of the alternatives.

"I don't trust that temps off the street, or jailhouse labor, or whatever alternative they come up with would work," she said.