The developments are a major blow to Brazil, one of the world's largest exporters of meat, which is struggling to emerge from its worst recession in decades. 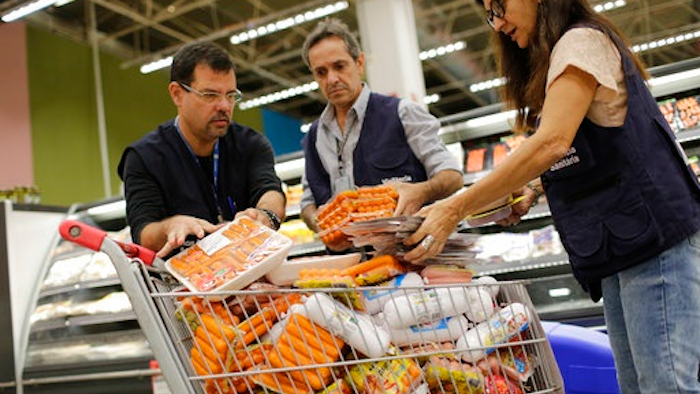 RIO DE JANEIRO (AP) — A scandal over allegations of bribery in Brazil's meat-packing industry to allow the sale of expired meat deepened as the European Union, China and Chile decided to halt some meat imports from Latin America's largest nation.

The developments are a major blow to Brazil, one of the world's largest exporters of meat, which is struggling to emerge from its worst recession in decades.

The announcements came despite a flurry of meetings that Brazilian President Michel Temer held with ambassadors and assurances from the government that Brazilian meats in general are safe.

Speaking to reporters in Brussels, European Union spokesman Enrico Brivio said the Brazilian companies involved in alleged bribery would be temporarily barred from shipping meat to the EU.

The EU "will guarantee that any of the establishments involved in the fraud will be suspended," said Brivio, who didn't cite companies by name or say how long the ban would last.

A few hours later, Agriculture Minister Blairo Maggi said China had suspended the unloading of Brazilian meats in Chinese ports. Maggi played down that development, saying Chinese authorities were in the process of asking for more information.

"There is no Chinese embargo," Maggi told reporters in Brasilia. "What we have are containers there that can't leave the port to local markets."

A Chinese foreign ministry spokeswoman in Beijing said China has taken "preventive and temporary" measures but gave no details.

"We hope the Brazilian side can carry out a thorough investigation in an open and transparent way," Hua Chunying said at a regular briefing.

On Friday, police issued 38 arrest warrants related to the probe, naming several companies including giant meatpackers JBS and BRF. Both have denied wrongdoing.

In a statement Monday, JBS said it had been "inappropriately connected to this story."

"There are no allegations in the judge's order that JBS or its executive management violated food safety or product quality standards or engaged in any wrongdoing," it said. "The investigation is focused on the actions of Brazilian Federal Meat Inspectors."

Late Monday, the Brazilian government said it was barring the exports of meats from 21 plants being investigated, but that sales for internal consumption would not be affected.

Investigators charge that health inspectors were bribed to overlook the sale of expired meats. Police also allege that the appearance and smell of expired meats was improved by using chemicals and cheaper products like water and manioc flour. Three plants have been shut down.

Temer called an emergency meeting Sunday with ambassadors of several countries. He assured them that Brazilian meats are safe and invited them to a Brazilian-style barbeque.

On Monday, Temer again sought to calm nerves, saying Brazil's meat industry should not be judged by a single investigation.

"The agro business for us in Brazil is very important and it should not be marred by a small nucleus (of bad actors), a small thing," he said, speaking to the American Chamber of Commerce in Sao Paulo.

Brazil was the world's largest producer of beef and veal in 2016 and one of the top exporters, according to U.S. Department of Agriculture. The country is also a major exporter of chicken and pork products.

On Monday, sanitation officials were out in force in several cities.

Marcia Rolim, head of Rio de Janeiro's municipal sanitary inspections, said routine investigations were being intensified in light of the investigation. Investigators collected several carts of meats for analysis. Some of the packages from at least one supermarket appeared to be rotten, with a greenish color.

Browsing meats on Monday at a supermarket, Carla Simone Macedo said she had periodically seen products that looked to be repackaged.

"We have very good meats," he said, adding it was good to see more inspectors.