More than 2,000 cheesemakers to compete for U.S. cheese championship. 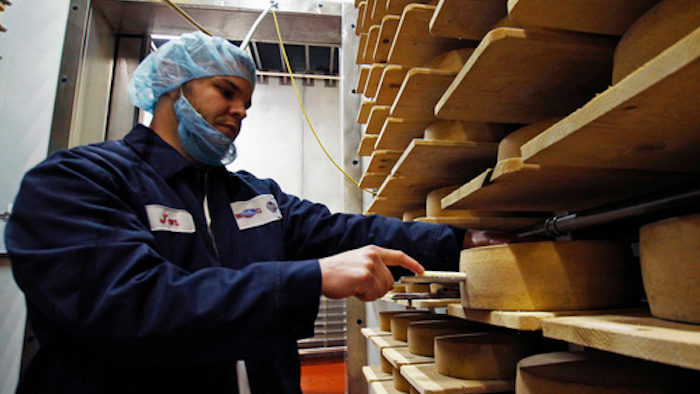 MILWAUKEE (AP) — The national cheese spotlight this week turns to Wisconsin — where else? — as judges get ready to sniff, taste and touch thousands of samples in the U.S. Championship Cheese Contest.

The national contest alternates each year with the world cheese-off. Judging is Tuesday and Wednesday at Lambeau Field in Green Bay, with winners announced Thursday.

Some things to know about the contest:

Entries for the national competition are up 22 percent, to a record 2,303, as cheesemakers recognize the marketing value of winning big competitions.

Case in point: Emmi Roth USA says sales have increased 20 percent for their Grand Cru Surchoix, made in Monroe, Wisconsin, since they won the World Championship Cheese Contest in 2016. It was the first time an American cheese won the title since 1988.

The exposure is why FireFly Farms in Accident, Maryland, decided to enter two cheeses this year into the contest for the first time. The farm, which distributes its goat cheeses mostly in the Mid-Atlantic area, has won more than 100 awards in other contests since 2002, according to the company's director of sales and marketing, Andrea Cedro.

Entering competitions introduces their cheeses to new retailers, buyers and customers, gets them valuable feedback from judges and often an increase in sales, she said. This year's competition includes 25 first-time companies.

The competition has 48 judges nibbling their way through 101 categories. They include ones you'd expect — mild cheddar, colby, mozzarella — and a few you might not, like smear-ripened soft cheese (cheese smeared with bacterial cultures during ripening), flavored cheese and Hispanic melting cheeses. New classes this year include flavored butter and snack cheese.

According to the Wisconsin Cheese Makers Association, categories that saw the greatest increase in entries include string cheese, which had 113 percent growth; soft ripened cheeses, with a 66 percent spike; and Edam and Gouda, up 52 percent.

Wisconsin had the most entries of any state, but New York, Vermont, California and Idaho also were in the top 5. Thirty-three states are represented altogether.

The Wisconsin Cheese Makers Association event this week is the largest technical evaluation of cheese, butter and yogurt in the U.S. It started in 1981.

The American Cheese Society also holds a national competition, but theirs is every year and moves to different regions of the country. Last year, they had 1,843 entries.

People bought nearly $18 million in cheese from U.S. retailers in 2015, up nearly 3 percent from 2014 and 27 percent from 2012, according to the International Dairy Foods Association.