It wasn't immediately clear how altered wheat cropped up in Washington, but the U.S. Agriculture Department said there is no evidence it has entered the market. 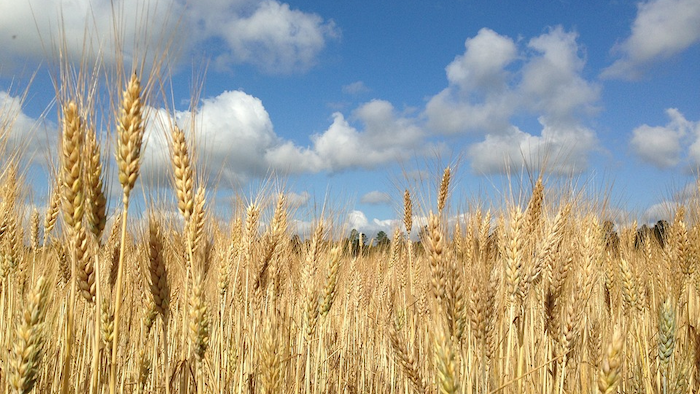 SEATTLE (AP) — Genetically modified wheat not approved for sale or commercial production in the United States has been found growing in a field in Washington state, agriculture officials said Friday, posing a possible risk to trade with countries concerned about engineered food.

The Food and Drug Administration says genetically modified organisms, or GMOs, are safe and little scientific concern exists about the safety of those on the market. But critics say not enough is known about their risks, and they want GMOs labeled so people know what's in their food.

On Friday, President Barack Obama signed into law a bill that will require labeling of genetically modified ingredients for the first time. The legislation passed by Congress two weeks ago will require most food packages to carry a text label, a symbol or an electronic code readable by smartphone that indicates whether the food contains genetically modified organisms, or GMOs.

Several Asian countries temporarily banned U.S. wheat imports after genetically modified wheat was found unexpectedly in a field on an Oregon farm in 2013. It also popped up in a field at a university research center in Montana in 2014.

It wasn't immediately clear how altered wheat cropped up in Washington, but the U.S. Agriculture Department said there is no evidence it has entered the market. If it did, the FDA concluded that "it is unlikely that the wheat would present any safety concerns if present in the food supply," the department said.

A farmer discovered 22 plants in an unplanted field, and the wheat was developed to be resistant to the herbicide known as Roundup, created by seed giant Monsanto, the USDA said. An agency spokeswoman did not know where in the state it was found.

Federal officials said they were working with the farmer to ensure that none of the modified wheat is sold. Out of caution, the agency said it is holding and testing the farmer's full wheat harvest, but so far it has not found GMOs.

The plants are a type of wheat that had been evaluated in limited field trials in the Pacific Northwest from 1998 to 2001 but never commercialized, Monsanto said in a statement. It said the type found in Washington state is similar to the one discovered in Oregon three years ago; it has the same inserted DNA but in a different location.

No variety of genetically engineered wheat has been approved for commercial use or production in the U.S.

GMOs are plants or animals that have had genes copied from other plants or animals inserted into their DNA. Most genetically engineered crops are corn and soybeans eaten by livestock or made into popular processed food ingredients like cornstarch, soybean oil or high fructose corn syrup.

Only a handful of modified fruits and vegetables are available, including Hawaiian papaya, some zucchini and squash and a small percentage of sweet corn.

The FDA also has approved for consumption a genetically engineered salmon that would grow faster than traditional salmon, but it's not yet available in grocery stores.

South Korea said Friday that it will inspect U.S. wheat imports for genetically modified wheat, the Yonhap News Agency reported. The Ministry of Food and Drug Safety said it has asked the USDA for information on the unapproved wheat and inspection methods.

The USDA said it has validated a test that Monsanto developed for the herbicide-resistant wheat, which would be available to trading partners.

"Trading partners will get the tests. I believe that once they have those in place, they'll continue buying," said Glen Squires, CEO of the Washington Grain Commission, a state agency that represents wheat farmers. "We don't anticipate any major disruptions."

The USDA also said it has beefed up oversight of genetically engineered field trials and now requires developers to apply for a permit for those involving GMO wheat starting this year.

In 2014, genetically modified wheat plants were found at a university research center in Huntley, Montana, where it was legally tested by Monsanto in the early 2000s. The plants in eastern Oregon were found in a field that had never conducted such tests, and the USDA closed its investigation two years ago unable to determine how the wheat got there. Different strains were found in each state.