Why would you test-drive plants? So scientists can make them work better and produce more. 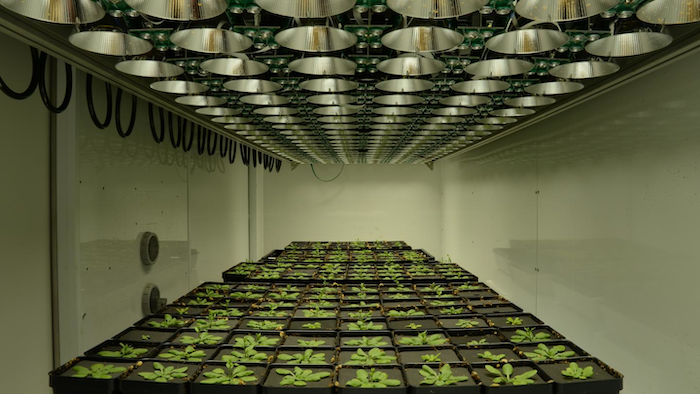 Many car companies push test models to their limits at Nurburgring before selling them off the showroom floor. For scientists, standard laboratory conditions and reproducible experimental designs have provided much of their understanding of photosynthesis. However, to truly understand one of the world's most-robust biological processes - and many other plant mechanisms - MSU researchers have brought nature to the lab.

The promising capabilities of DEPI are featured on the cover of the current issue of Cell Systems. DEPI will help scientists make better plants by allowing researchers to systematically explore the effects of real-world conditions using sophisticated sensors, cameras, software and more.

"With DEPI and all of its specialized equipment, we can make videos of a plants' living processes," said David Kramer, Hannah Distinguished Professor in Photosynthesis and Bioenergetics at the MSU-DOE Plant Research Laboratory and the paper's co-author. "One way to make better plants is to test drive a range of plants with different genes and determine which genes, or combination of genes, make the plant better in different environmental conditions."

For decades, scientists have been dissecting complex processes like photosynthesis into component parts that are much simpler to study. Focusing on an element, though, can lead to missing what's happening to the entire plant.

Photosynthesis is highly sensitive to rapid changes in environmental conditions like light, temperature, humidity, the availability of water and nutrients etc. Even more critically, when the plant cannot properly control photosynthesis under these conditions, it can produce toxic side reactions that can damage or kill it, leading to loss of yield.

"We now suspect that many, if not most, of the genes in a plant are there to help it cope with environmental changes and perils," Kramer said. "And although we know much about the core machinery of photosynthesis, we have very little idea what these other genes do. Yet these are the very components that not only keep photosynthesis working efficiently but also keep it from killing the plant."

DEPI will not only help shed light on many of these mysteries, but it also will be able to do it at a relatively large scale. Kramer has 16 DEPI's in the MSU Center for Advanced Algal and Plant Phenotyping. In a single DEPI, and its roomy chamber, it can monitor hundreds of plants at the same time.

Scientists can play with light intensities and durations or replay past weather patterns - down to the exact daily fluctuations - or run models of new ones that anticipate the impacts of climate change. The chamber's special cameras can detect and quantify visible signals produced in real time by plants during photosynthesis.

While traditional methods rely on sensors applied to a single leaf at a single point in time, DEPI reveals what is happening in the whole plant, over an unlimited time period, said Jeff Cruz, director of MSU's Center for Advanced Algal and Plant Phenotyping and the paper's lead author.

"As a result, plants are demonstrating a whole range of new processes, most notably varying behaviors under dynamic environmental conditions, such as when light changes rapidly as it might do on a windy day with partially cloudy skies," he said. "Because these simulated conditions are reproducible in DEPI and because of our sophisticated monitors, we can study these processes with high precision and in great detail."