The West Bank factory employed some 500 Palestinians, providing a lifeline to the workers in an economy where unemployment is high and wages low. But boycott activists said the factory was a symbol of Israel's nearly 50-year-old occupation. 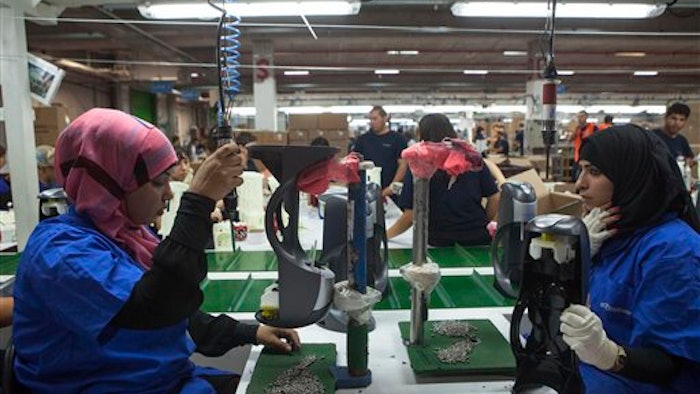 JERUSALEM (AP) — The layoffs of hundreds of workers following the closure of Israeli company SodaStream's West Bank factory has even some Palestinians questioning the wisdom of the anti-Israel boycott movement. The fundamental contradiction: while Palestinians support the international outcry against the occupation of the West Bank, businesses attached to Israel's far richer economy nonetheless offer much-needed jobs.

The West Bank factory employed some 500 Palestinians, providing a lifeline to the workers in an economy where unemployment is high and wages low. But boycott activists said the factory was a product and symbol of Israel's nearly 50-year-old occupation, and part of a network of settlement businesses standing in the way of Palestinians building a vibrant economy of their own.

For years, the factory in Mishor Adumim was a prime target of the BDS movement, which calls for boycotts, divestment and sanctions in what it says is a nonviolent struggle against Israeli occupation. BDS activists had lobbied stores around the world to remove the company's fizzy drink makers from their shelves until it shuttered the West Bank factory. In 2014, the company said it would shut the plant and move its operations inside Israel.

Palestinians require permits to work inside Israel, and most of the factory workers, unable to get them, were let go last year. The 100 or so permits SodaStream managed to secure expired Monday and weren't renewed, sending the remaining Palestinian workers packing.

"I'm not against BDS," said Mohammed Jaradat, one of those workers. "They have the right to be political, but they need to find us jobs before they close factories." Jaradat, 36, worked at SodaStream for seven years and is now searching for how to support his four children.

"I cannot work in the Palestinian territories," he said. "First, there are no jobs. And second, the salaries are very low." He said Palestinian factories pay about half of the 5,000 shekel ($1,250) monthly salary he earned at SodaStream.

The BDS movement has grown into a worldwide network of thousands of volunteers lobbying corporations, artists and academic institutions to sever ties with Israel. It has three goals: ending Israel's occupation of territories captured in the 1967 Mideast war, stopping discrimination suffered by Arab citizens of Israel and promoting the rights of Palestinian refugees to return to family properties lost in the war surrounding Israel's creation in 1948.

Israel says the Palestinian "right of return" would lead to a massive influx of refugees and mean the end of the country as a Jewish state.

The movement has made gains in recent years. U.S. and British academic unions have endorsed boycotts, student governments at universities have made divestment proposals, and some famous musicians have refused to perform in Israel. The BDS movement also claims responsibility for pressuring some large companies to stop or modify operations in Israel, among them SodaStream.

The campaign against SodaStream made global waves when actress Scarlett Johansson parted ways with the international charity Oxfam because of a dispute over her work as brand ambassador for the Tel Aviv-based company.

When SodaStream opened its new factory near the Israeli desert village of Lehavim, it was only able to secure about 100 permits for Palestinians. The company's chief executive, Daniel Birnbaum, reacted angrily Monday when the government did not renew the permits.

"We're sending them to unemployment and anxiety and fear and despair at a time when they have no alternatives," Birnbaum told The Associated Press.

Birnbaum denies that the BDS campaign had any effect on the decision to move the factory, saying the company needed more space. He blames the job losses entirely on a "tangled" Israeli bureaucracy, adding that if Israeli leaders were truly interested in promoting peace, they would have found a way to grant permits to all the Palestinian employees.

Amid the backlash from BDS activists, the company has portrayed itself as a beacon of coexistence. The new factory employs Bedouin Arab women, young Ethiopian Jewish men and Russian immigrants. Palestinian employees had received a shuttle service from the West Bank, and the wages and benefits they received were on par with Israeli standards, the company says.

Palestinians and human rights groups, however, say such arrangements mask an unfair system in which Israeli businesses often exploit a captive labor market by paying low wages and are granted preferential access to land and resources. International organizations like the World Bank have long called on Israel to open up the West Bank to more Palestinian development.

Omar Barghouti, the BDS movement's co-founder, said Israel's "regime of occupation" is to blame for the job losses because it forced Palestinians "to become laborers in its factories in illegal colonies."

"Those who claim that BDS hurts Palestinians are ... making unfounded claims and failing to understand how resistance is always costly at first," said Barghouti.

Cogat, the Israeli military body that oversees Palestinian civilian affairs, says 58,000 Palestinians have permits to work in Israel and 27,000 others can work in settlements, often building the homes widely seen as an obstacle to creating a Palestinian state. Thousands more work in Israel illegally, and plans are reportedly underway to grant an additional 30,000 permits.

A recent report by Human Rights Watch said that businesses operating in settlements contribute to and benefit from "an inherently unlawful and abusive system that violates the rights of Palestinians."

"The best thing Israel can do for the Palestinian economy would be to remove settlements and settlement businesses," she said.